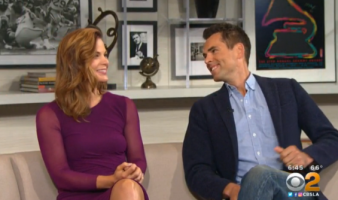 All eyes this week are on the juggernaut that is The Young and the Restless as they are heavily promoting, and bringing viewers major story for their 11,000th episode scheduled to air this Thursday, September 1st on CBS.

This morning, series stars Jason Thompson (Billy) and Gina Tognoni (Phyllis) sat down with CBS2 Los Angeles news anchors Sharon Tay and Rick Garcia to talk all things Billy and Phyllis, and if their affair will finally be out in the open, as well as being part of the daytime drama as it celebrates their latest milestone.

Gina said the 11,000 episode really helps kick off the fall stories on Y&R, and one story will be the reveal of Phyllis and Billy’s hot and heavy affair behind Billy’s brother back.  That would be none other than Jack Abbott. (Peter Bergman) Not to mention Phyllis is married to Jack and had been cheating on him with his brother!

When discussing the fan reaction to if Phyllis should wind up in the end with Jack or Billy … the duo reporst it seems 50/50 split down the middle with the viewing audience as to who they are rooting for.

Thompson, also talked coming on to the show after a wildly successful run on General Hospital and stepping into the shoes of one of the pivotal characters in Genoa City. While Gina’s last name of “Tognoni” was also bantered about, and the two-time Daytime Emmy winner revealed that she even considered trying to go by an an easier-to- say-last-name, but in the end rejected it for the real deal.

Watch the segment with Jason and Gina after the jump! Then let us know which side are your on!  Do you want Phyllis with Jack, or Phyllis with Billy? Share your thoughts in the comment section below!

GH's Emma Samms On Not Being In Cast Of DWTS: "So Sorry To Disappoint. Not Entirely Sure How That Rumour Started!"

GENERAL HOSPITAL: A Killer Revealed, Sisters Confirmed, A Tumble Down The Stairs!

They are thunder & lightening !

Jack is acting like an 80 year old monk ..
He and Phyllis are horribly matched ..

Great interview, Thanks for sharing. Really want Billy and Phyllis together. The ship has already sailed and sunk with their previous partners. Like Johnny Depp said, if you fall in love with two people at the same time, choose the 2nd because if you really loved the first, the 2nd wouldn’t have happened. Best of luck to all of the cast and crew with the 11,000 episode. May there be many more.

I believe Phyllis belongs with Jack ….too much potential heartbreak with Billy.

Phyllis should not be with either man. Billy belongs with Victoria and Jack treats Phyliss more like a child than his wife. They should bring back Ronan for Phyllis!!

Hi Sarah, I disagree!
Billy and Vikki are done I think, and with this Billy, no chemistry.
I didnt care for Travis at first, but now I like him with Vikki.
Jack in my opinion behaves like a super caring husband who
appreciates life more after all the drama he and Phyllis have been
through, and just wants to be happy etc. He shouldnt have to rein
in Phyllis so often, but he loves her.

Phyllis has always been drawn to the wrong man and she passed that on to her daughter. Even though it’s so wrong, Billy and Phyllis spark up the screen. They should be together but I want to see Jack really destroy them both for what they did to him.

I think that the pairing of Billy and Phyllis may finally bring back the Jack Abbott of the past. Jack has become so boring, he used to be a real fighter! Phyllis and Billy definitely have chemistry and the Victoria/Billy love story is DONE.

Billy and Phyllis all the way please. Gina and Jason have explosive chemistry and are so fun to watch. Great interview, let’s get to this reveal so Billy and Phyllis can finally be together

Sorry, Phyllis with anyone but Billy!

Phyllis and Billy all the way!!!! GT and JT have fabulous chemistry and the characters really get eachother, they both push the envelope but also love fiercely when it’s real. Phyllis may love Jack but she hasn’t been in love with him for years… he tries to stamp out yet fire now that he’s gone all soft. Phyllis needs a man who can appreciate all facets of her, not one trying to shove her into a box and silence her.

I was thinking about these characters and the actors that have portrayed them I remember a story years ago when Phyllis was helping do a teen web site and Billy and Mac were dating and Brittany asked for help from Phyllis to break them up. Anyone else remember that storyline? That’s why it is hysterical years later these being involved . Only on a soap opera right!

Well, Gina is exaggerating when she says the audience is 50/50 on the Philly affair. Most people HATE it and they dont like her or Jason as Billy! I guess in Hollywood everyone is a bit delusional?

I’m with you, Timmm. I can’t imagine why ANYONE thinks there’s chemistry there. JT always looks like he wants to strangle her. Except when he’s making (unfunny) sarcastic remarks. Billy comes across to me now as someone incapable of happiness and, worse, of never thinking of anyone but himself. Jack deserves better than BOTH of them.

He looks like he has a huge chip on his shoulder i can’t stand him as Billy he has ruined the legacy of that character if they had waited Tom would have made it his own again !HFP makes me sick her decisions have destroyed this show

Jack will be lower than ant crap BUT you are right, he deserves better and will be better off without either of them in his life.

Jack, what a bunch of BS! He gets crapped on and then vows for revenge and he cannot even relish the thought for a day and nowPaul is brow beating him and now I guess he will be charged with assault? STUPID!

Soaphound, thank you for the explanation of Justin’s new show. You are good! I didnt pick on the twist and I was kind of iffy on episode two. I will watch it now and see if i am shmart enough to follow! HA!

It’s obvious she said that because she doesn’t want to choose a side. A lot of people hate Philly but a lot of people love them, and I think Philly are more loved than Phack.

i like jason thompson a lot better on GH. he was sexy, fun, charismatic patrick drake but on Y&R he’s boring. i tried to watch and get into it but just could not.

Billy & Phyllis for sure!! Jack wants a woman who sits at home and knits. Phyllis realizes he is just to boring for her.