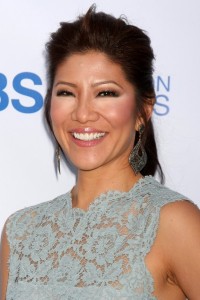 Looks like Genoa City is going a bit Hollywood.  According to Entertainment Weekly, Big Brother and The Talk host, Julie Chen will be seen in an upcoming episode of the CBS Daytime sudser, The Young and the Restless.  Julie is taping her scenes today.

Chen, who is part of a series already on the network’s afternoon programming block, is taking a page from her ‘Talk’ co-host Sheryl Underwood and appearing on the soaps.

In story, when Hilary (Mishael Morgan) goes to Hollywood for her GC Buzz news magazine show she wants to get her ‘idol’ Julie Chen on her show. Apparently, Hilary will stop at nothing to have this happen!

Be on the lookout for Y&R characters to appear in these upcoming Hollywood-based episodes starting on Monday, May 15th with Chen making her appearance on May 17th.

So, intrigued to see Chen on Y&R in scenes with GC’s Hilary? Comment below!

A Martinez Says Farewell To DAYS In Heartfelt Message

GH's Maurice Benard Chats On: Ingo Rademacher, The Storyline He Is Most Proud Of, And His New Outlook!

It’s bad enough B&B has Sheryl on, now this?

They do?
I did not know that.
I agree, this is not necessary and does nothing to enhance the entertainment value.

Go Julie go! As long as that god awful annoying Underwood lady stays off the show!

No kidding. “The Talk” hosts are really annoying and obnoxious.

Not a big fan of the whole GC BUZZ storyline but Julie Chen is awesome.

I just don’t get Y&R. This is 2017 and this story is definitely from 2001!! If anything, Hilary should have always been arguing that the show should have been on the internet! What local tv gossip show could get enough ratings that some stupid lying gold digger would give up $250,000,000.00 divorce settlement for it?! This is why I’m so tired of the show. No real imagination. Victors next story is his biography written by the new town gossip, Scotty, fresh from his desert cage?! If the show truly wants to rewrite Victor’s story (we all know that so much… Read more »

I agree, GC Buzz is horrible! Get Mariah away from that whole scene! Give Sally time with the book. Scott will find himself tangled in Victor’s web and then Leanna will arrive, you’ll see!

I shall stay mum about the guest appearance from The Talk, but I AGREE with you about having Leanna Love back on the show! She was such a complex character and would b a nemesis to so many others. Love to see her written back in. Same goes for Tricia (Ryan’s ex.) Would love to see her waltz back into town. Time for someone to give Victoria some maddening grief. I know there’s been a slew of crazies, but, heck, why not bring them all back at once? There’s a thought.

I agree with all of you. Yes, Timm, Mariah is too cool for the GC Buzz. The Mariah I know and love would want nothing to do with that show.
Paul and Ron, love your ideas about Leona Love.

I guess when your spouse is a high ranking person @ CBS you can get on any show on the network. Her voice is so monotone that it sounds like chalk on a blackboard.

The Talk regularly have CBS Daytime stars as guests so it makes sense for Y&R to do the same to her and any of her co-hosts.

NIK…the second sentence in your post is so funny…LOL!!!!! AND SO TRUE!!!!! Oh…and BTW, to me, that Julie Chen woman is not as innocent-looking as she looks. Bottom Line Here: I wouldn’t trust her (or whatever). Nope.

Have a good one, NIK.

Nik is right about her voice. It is grating!
I have noticed certain CNN anchor women talk through their nose and sound like they have marbles in their mouths.
When did broadcasting schools stop teaching voice, speech and elocution?

I agree. Keep hosting BB and The Talk that’s enough.

Not intrigued to see Hillary with the road kill up the street, let alone someone human..

Ugh. I’ve never cared for Chen. I’ve spent over five years avoiding “The Talk” on principle: I won’t watch the show that is “partially” responsible for the demise of “As the World Turns”. (Partial as I want to make sure that ATWT producer Chris Goutman and head writer Jean Passanante get their equitable share of the credit for pushing ATWT into a grave). Now, Chen is surfacing on “The Young and the Restless”??? I may skip those episodes.

Oh gawd, another awful stunt casting. Does Julie just whisper in hubby’s ear that she wants a show (The Talk) or guest star on a show (Y&R) and he grants her wish? Must be nice!

Hey, I simply love Cheryl Underwood!! She is so real in all issues. She gave $Bill a wonderful way to go. She is quick witted and so funny……again, I would miss her on the Talk and would like to see her more often on Bold and Beautiful.

I love the talk, all the ladies & will love to see them all on Y&R OR B&B. Love both shows. .. you ladies get on what ever you can it’s magnificent to see you on daytime.

Makes little difference to me..
I have never heard of nor seen this Chen person.
I wouldn’t have even noticed/known…. lol

This is shameless cross promotion during sweeps month, which CBS does all the time. Y&R audiences will hear all about the Talk, and on the Talk they will promote Chen’s appearance on Y&R– win, win in CBS ‘s eye (s) — I can’t imagine her appearance will be for more than a scene or two at most, so it is what it is– story wise it makes more sense than some stunt casting-in the past- I can totally understand why Hilary would like to meet Julie Chen– they have a lot in common– both got their talk show gig from… Read more »

I’ll be skipping this episode — nothing original here.

Don’t skip–just fast forward through her scenes. It will be brief I am sure.
Besides, Chloe is about to be found out!

Chen on Y R. Would just make SURE I never watch. Julie chen and her sap husband, they made sure I wouldn’t watch the Talk no matter what. Never have never will. They out this garbage on in place of my favorite show ever. As the world turns. See her face the remote comes out and that’s the end of it. No soaps on that channel even when they have TR on.