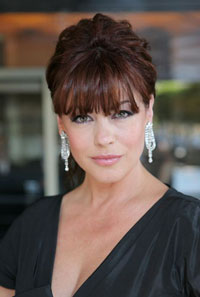 ATWT’s Julie Pinson (Janet) spoke to We Love Soaps at the Broadway Cares Flea Market event. In the interview Julie discusses Janet’s future, meatballs, and her feelings on her character on the CBS soap as opposed to when she appeared on DAYS and Port Charles. Here a few excerpts:

We Love Soaps: You have seen more relaxed and comfortable on this show than I have perceived you to be on other shows. Is that just me or is that true?

Julie Pinson: I think on AS THE WORLD TURNS they’ve given me a lot more rope. They’ve let me run with Janet and do whatever I want with her. They’ve allowed me to put more of myself in her. She’s not the victim like she was on DAYS OF OUR LIVES. They kept putting Billie with super couples. You can’t put her in between super couples. Billie is never going to win that way. She’s never going to win with Patch and Kayla. She’s never going to win with Bo and Hope. They never gave her her own guy. So it was boring for me to play. I was just Chelsea’s mom. So now I’m a mom again on this show but I have so much more of a life. I’m not just a mother, I’m a lover, I’m a wife, I’m independent, I’m a chef, a talk show host once in awhile. The writing on AS THE WORLD TURNS is so great, there’s really not much I can do to mess it up. It’s already so good.

We Love Soaps: What would you like to see happen for Janet in the future?

Julie Pinson: Well, without giving anything away, let me just say that as you know on soap operas it’s rare for you to stay with one person for a very long time. So if Janet were to split with Jack, if that were possible, it would be nice for her to go along the lines of a Craig or a Dusty. To mix it up a little bit, to have some fun with some different guys!

As The World Turns Reunions On Tap This Week

Look for a double-header to walk down Oakdale memory lane this week when Alan Locher hosts new virtual reunions with the beloved cast of the former 54-year-old CBS soap opera, As the World Turns on his ‘Locher Room’ You Tube channel

First up, on Tuesday July 21st look for Martha Bryne (Lily Walsh) to reunite with William Fichtner (Rod Landry) in a special chat beginning at 2 p.m. EST/11 a. m PST.  You can watch that livestream here.

Later in the week on Friday, July 24th, beginning at 2 p. m. EST/11 a.m PST, the foursome of: Judson Mills (Alexander “Hutch” Hutchison), Yvonne Perry (Rosanna Cabot),  Allyson Rice (Connor Walsh) and Tom Wiggin (Kirk Anderson) will come together to relive their favorite moments together and apart during their time on ATWT.   You can watch that livestresam here.

So, will you be checking out these two new cast get-togethers?  What do you recall as your favorite storylines featuring the actors who are on tap for their ATWT virtual reunions? Comment below.