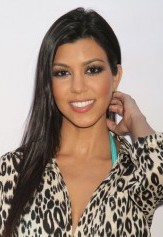 Here’s a casting shocker for you! Kourtney Karadashian one of the E! Entertainment top reality stars along with sister, Kim and the Karadashian clan is set to tape a guest spot on One Life to Live, not playing herself! It’s Kourtney’s first acting gig!

According to EOnline, “Producers of ABC’s iconic soap opera are being tight-lipped about specifics, but did reveal Kourtney will appear in scenes with smokin’ hot David Fumero, who plays Cristian Vega, as well as with Kassie DePaiva, who plays troublemaker Blair Cramer.

“I grew up watching One Life to Live,” Kourtney says. “I hear I get into some trouble and I am looking forward to it. This may be my acting debut, but the Kardashians know a thing or two about drama.”  Kourtney is set to shoot her guest stint tomorrow.   Her character’s first appearance will be a very dramatic entrance alongside Cristian. The episode will air in March.

Apparently the E! cameras will be there to capture it all as it seems its all part of Kourtney and Kim Take New York the second spinoff to Keeping Up With the Kardashians.  Ah synergy and promotion, gotta love it!

Jack Wagner next soap star to guest on "Hot in Cleveland"!