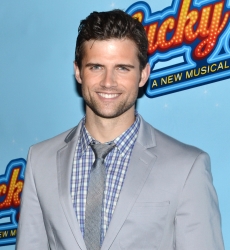 Could Will Lexington (Chris Carmack) take a page from the debut of the newest character on the Nashville canvas?  According to Deadline , Broadway and TV star, Kyle Dean Massey will play the role of Kevin Bicks, who happens to be one of country music’s biggest singer/songwriters …  and … he is openly gay!

As viewers know from the beginning, Will Lexington has tried to keep in the closet about his sexuality, even marrying Layla (Aubrey Peeples), who when we last saw her looked like she was floating dead in a pool!

An all-new Nashville returns with the second half of its season on Wednesday, February 4th!  About the character of Mr. Bicks though! He is described as a successful country artist who happens to like guys, and his very existence deflates Will’s theory that the genre will never accept a gay superstar.

As for Kyle Dean Massey, he has been starring on the revival of Pippin on Broadway and is known for his TV roles in The Good Wife and Hart of Dixie!

So, what do you think about Kyle being cast as out country artist Kevin Bicks? Is it time for Will to have a viable love interest? Could this be it … or just a lesson learned?  Comment below!

I like Nashville, to a point.. there really are no great stories; weak on a good gripping story.. and- there is way too much music and it’s its country.. If one is not a country music fan the show could be irritating to them lol .. Less music and more story, I would be happier with Nashville.. ((wish they play some Led Zeppelin and Clapton.. and some AC/DC and KISS to pick it up .. and bring it home with the greatest performer of all time Freddie Mercury and Queen.. and bring it home , for Harry, with Etta James… Read more »

Freddie Mercury and Macdonald Carey had something in common. They both famously uttered these words: These are the days of our lives.

Some of the dumbest remarks! This is a country themed show and should have country music. It is as it should be. If it not enjoyed the viewer has the wrong program on! Nashville is a great show complete with country music just as it would expected to have.

Bring it on! Looking forward to seeing him and where this goes.

As always, love the show….everything from the fantastic music…I think like a lot of us who grew up hating country music the “new” country is so fused with rock, blues, etc that it’s crossed genres…to the soap operaesque relationships and stories. Just love this little microcosm. I’m not familiar with Kyle Dean Massey. He’s gorgeous! Should be a great addition to the show and Will’s story… Looking forward to it!

As a side note, he looks like he could be Deacon’s son!

Love Nashville! Rebecca1 has some very interesting points. Can’t wait for it to return – give me some Deacon & Rayna love!

I’m not a big fan of country music, but this is called Nashville for a reason. I enjoy the storylines and the music anyway.

Hopefully this gets Will’s story out of stall mode, though I am still bummed the show did away with Brent.

I love Kevin! And I was thrilled when Will finally admitted his true orientation. I know that by addressing these social issues in a very popular TV show it helps us to move forward in our society. Love Love Love it!