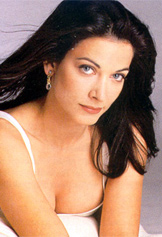 In an exclusive reveal by Tv Guide Canada’s, Nelson Branco, Lisa Peluso has joined the cast of Martha Byrne’s new soap web series Gotham! In the interview out today, Peluso announces she will be playing the role of Veronica Manning, the ex-wife of Richard Manning played by ATWT’s Michael Park.  No stranger to soap bad girls and vixens, fan remember Lisa most from her roles as Lila Winthrop on Another World and Ava Rescott on Loving. Peluso was last seen on daytime in the role of Gina Russo on One Life to Live. Here are a few excerpts from the interview!

Peluso on her new role in Gotham: “All I know is that I’m playing Michael Park’s ex-wife, Veronica. I haven’t received a script yet so there isn’t too much I can tell you.  I know Michael from our P&G days. Martha is such a sweetheart, so when she called me to be on her show, all I could say was, “No problem!”

Peluso on what soap role was her favorite: “Well, Gina Russo on One Life To Live was my least favourite role, I can tell you that much! [Laughs] During my second run on One Life, I was unfortunately caught between two head writers so they didn’t know what to do with me. But I agree with you — my favourite character is Lila. A lot of people are surprised to learn that. I had such a wonderful career and time acting on Loving, of course, but there was just something about Lila that made the whole experience fun and magical. It was a beautiful marriage between the writing and the cast, I think.”

Make sure to read the entire transcript here!

Billy Miller talks with Peter Bergman on his 20 years on Y&R!