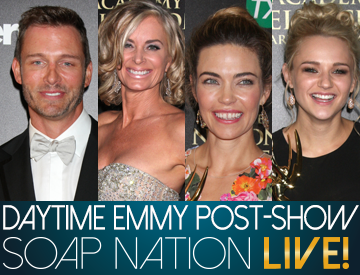 Last night on the Daytime Emmy Post-Show edition of the Internet Radio Series, Soap Nation Live with Michael Fairman, newly crowned Daytime Emmy winners Eileen Davidson from Days of our Lives, and Amelia Heinle and Hunter King of The Young and the Restless joined Michael and special co-hosts; Emmy winner Eric Martsolf and Lauren Koslow of Days of our Lives for a lively 90 minute broadcast.

Lauren revealed some of her picks for the Best Dressed Women, Men and Couples and previewed her upcoming On-Air On-Soaps Emmy Fashion review, while Eric Martsolf and Amelia Heinle discussed being first time nominees and first time winners.

During Amelia’s segment, Michael played her Emmy acceptance speech which he deemed his favorite of the night, and also played a clip to Amelia of Daytime Emmy winner Billy Miller (Ex-Billy Abbott) talking about working with Amelia during their time together on Y&R as Billy and Victoria while backstage on Emmy night.

During the episode, Eric got a very surprise phone call when none other than his best friend, Revenge, Mistresses, and former Passions star Justin Hartley called-in to wish Eric congrats on his Emmy victory! Eileen Davidson offered up her thoughts on finally winning gold for the first time in her storiedsoap career, and what it was like playing Kristen in the scenes that won her the Emmy and more! Later, The Young and the Restless Hunter King joined the show and revealed her thoughts on her Emmy winning scenes and what it was like having her name called.

Michael discussed the backlash of the hiring of the four social media hosts who were given the job of interviewing the soap stars on the red carpet and in the social media lounge for the 41st Annual Daytime Emmys!  During that segment,  audio clips were played of  Red Carpet hosts: Brittany Furlan, Lauren Elizabeth, Meghan Rosette, Jessica Harlow including: the Ryan Paevey incident where they say they want to “rape” the General Hospital star, their question to Steve Burton in which the long time favorite and Daytime Emmy nominee couldn’t really understand what kind of question it was, and how the gals handled their live tosses back and forth to each other.

In addition, Linda Bell Blue of Entertainment Tonight‘s very lengthy acceptance speech, former DAYS star Chandler Massey being seated in the back of the room and then having a clip of his successor in the role of Will Horton, Guy Wilson played for his Emmy nominated clip instead of his own work, and The Talk’s Sharon Osbourne “F-bombs” were discussed.

Now below listen to Soap Nation Live! with Michael Fairman Daytime Emmy Post-Show and then let us know what was you favorite part of it?

Burgess Jenkins Chats On Taking Over The Role Of Billy Abbott On Y&R!

Outside of the mistake, the backlash of the hiring of the four social media hosts who were given the job of interviewing the soap stars on the red carpet , what a joke.. Another big mistake was; Amelia Heinle and Hunter King getting the best actress award when neither are near being the best actresses.. Ava / Maura West puts both of them under the table.. As do other of the 4 soaps female actress.. I do not ”get it” why or how those two won best actresses or how Y&R won for best soap. DROOL and GH were both… Read more »

thank you for the “DROOL” with DOOL part tho

You know what AH & HK’s reels were very good! They are based on that reel how the heck do you think anybody could judge something on a years work! Back off and let them enjoy their win it is hurtful and not necessary! What does Maura West have to do with either of them she has two emmys for best actress!

Red Carpet was awful! I was online streaming it and QUICKLY turned it off!

i was just so appalled, disappointed & disgusted with the red carpet interviewers – they new absolutely nothing about our beloved daytime genre – three things really pissed me off: 1. asking lawrence saint victor how does it feel to be a black man on soaps these days 2. the rape comment made to ryan paevay 3. asking joseph mascolo what makes him a daytime icon the red carpet was just a nasty insult to the entire daytime community especially the actors/actresses and also the fans – i would have turned it off but i love daytime drama & have… Read more »