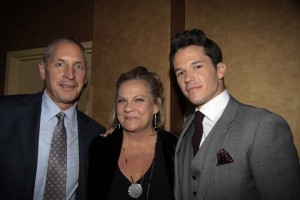 It’s a very exciting time for former Days of our Lives star Mark Hapka (Ex-Nathan), who is the leading character and star of the new film 23 Blast which is heading to theatres shortly! But Hapka is not alone! In the motion picture with him are: daytime icon, Kim Zimmer (Ex-Reva, GL and Ex-Echo, OLTL) who plays Hapka’s mother, and Queens of Drama cast member Crystal Hunt (Ex-Stacy, OLTL, Lizzie, GL)!

The inspiring theme in the movie is one young man’s triumph over tragedy.  23 Blast is based on a true story of Travis Freeman (Hapka).  Freeman is a football player, a sport he loves, who goes blind while in high school. A s the story progresses, Travis must decide whether to attempt to play again, even without his sight!

The film by Dylan Baker has its world premiere earlier this week on  October 20th at Regal Cinemas E-Walk Theatre, New York City, where many of the cast was in attendance including former OLTL director Gary Donatelli (pictured here with Mark Hapka and Kim Zimmer) who is in the film, and none other than GH’s Kristen Alderson and OLTL’s Kelly Missal, who stopped by for the premiere to wish their soap star pals well!

Watch the trailer for 23 Blast: Vision Come From Within after the jump! Then, let us know what you thought of it!

How Does Adam Newman Come Back To The Y&R Canvas? Justin Hartley Fills Viewers In!

Mark hapka is so cute!

I think Kim Zimmer looks her age. NATURAL. We are so used to seeing ageless faces on TV, that we forget that the majority of actors/actresses go under the knife to make themselves look younger. The results are sometimes great and other times monstrous. When I reach 60, I’d rather age gracefully and look my age than look like Jackie Zeman. Donna Mills looks great for 73…. Thanks to plastic surgery?…she has a youthful face on an old body. I will probably be penalized for this. Why hide it? I’m speaking the truth and what most think but not dare… Read more »

Thats what i say too…why hide it…my comments are always going to be truthful and i will speak it…ive got a lot of backlash for it but that wont deter me from speaking mho…meanwhile, i certainly could use a plastic surgeon…lol

Looks like a cute and corky fun sports movie to watch.I will look for it when it comes out..I wish some of the remaining soap will give Kim “The Legend” an offer, she is SO needed back in daytime, only if she wishes..Crystal Hunt is such a under rated and talented actress that I will also love to see back in daytime…Her portrayal of Lizzie was good and of the conniving Stacy was classic “love to hate”!!

Hope it gets a wide release. I would love to see them all.

The movie actually looks cute. I would go see it. Kim is a very talented actress. Crystal was never given her due. Loved Lizzie no matter who played her. I agree about Kim looking her age. I am 72 , and why put yourself through something like face lifts that will fall and you will look worse. Jackie Z, and Hunter Tylo both were beautiful and now look disgusting. You watch them and can’t look away.. We all get old and men are allowed to age so just be glad you are still alive and enjoy your life.I look at… Read more »