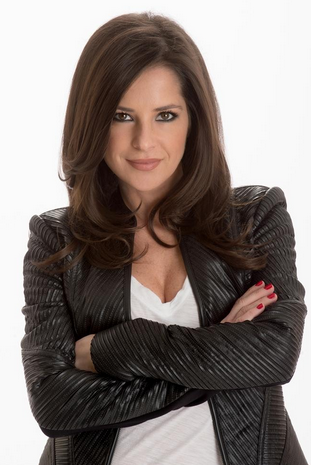 As previously announced in a clever move, cast members from ABC Family’s Baby Daddy and ABC’s General Hospital will crossover on both shows this February.  However, today more details were revealed as to what happens in story in the Baby Daddy episode featuring Port Charles favorite, Kelly Monaco (Sam)!

It all starts on Wednesday, February 4th ay8:30ET/PT on ABC Family.  In the episode entitled,“Over My Dead Bonnie,” on Baby Daddy, Kelly Monaco plays an exaggerated version of herself.  Danny (Derek Theler) is offered a cameo role on General Hospital and he’s really nervous and asks Riley to help him rehearse. Riley is a huge fan and can’t believe Danny is going to be in a scene with Kelly Monaco (Kelly Monaco), who plays her favorite character, Sam.  Although Kelly is initially annoyed by the stunt casting, she soon finds Danny charming and decides he needs to be her new love interest. Meanwhile, Tucker and Ben are tired of living with Bonnie (Melissa Peterman) and are determined to get her out of their apartment and back into hers. The boys figure out the best way to break the lease is to have Bonnie “die,” so they stage a funeral on the General Hospital set. Michael Lembeck (“One Day at a Time”) also guest stars.

Then on Friday, February 13th, Baby Daddy’s Derek Theler (Danny Wheeler) and Melissa Peterman (Bonnie Wheeler) will guest star on GH  for a special Valentine’s Day episode.  Melissa Peterman plays an old friend of Olivia’s from Bensonhurst, and  Derek Theler plays a colleague of Dr. Patrick Drake. In this episode, it is Valentine’s Day in Port Charles. Olivia receives a surprise visitor from her Bensonhurst days. Melissa Santoro-Picard (Melissa Peterman) and the two old friends quickly catch up on life and loves. Later in the day, Melissa runs into another familiar face in Port Charles.   Meanwhile, Dr. Patrick Drake is called to consult on a case at the last minute, delaying his date with Sam. Coincidentally, Patrick’s colleague Derek (Derek Theler) was also stood up by his date. Derek and Sam agree to keep each other company until their significant others arrive. As the night progresses, the two discover the true meaning of Valentine’s Day.

So, what do you think of the set-up for Kelly Monaco’s appearance on Baby Daddy?  And, Derek Theler and Melissa Peterman on GH? Comment below!

OK-
It will be a fun time !!!
Breaking through the fence is always a good time..
I am looking forward the entertaining crossover !
I am always up for something different to explore and have a good time with it!
(( that is what it is all about- a good time watching!!

I agree it will be nice to see them pop in Port Charles. I really like Melissa Peterman; she’ll likely bring some fun to Valentine’s Day.

Sounds completely pointless and waste of time for a Valentine’s day episode on GH. I’d rather see another hot bedroom scene with Olivia and Julian! A romantic valentine’s dinner with Dante & Lula. Monica on a new date with Judge Walters, again. Lucy at the metrocourt hopping between Duke, Scotty and Sloane! ha-haha. Also would love to see a romantic double date with Liz & Rick and TJ & Molly. And, Lucas & Brad! GH, give us our couples for Valentine’s day!

Sounds good to me, Jeremy.

I mean, what YOU wrote, Jeremy…..it’s all good and I agree.

I have looking forward to both of these episodes. “true meaning of Valentine’s day” has me intrigued as to what we are going to see in this episode. I am amxious to see Kelly in this comedy show, it should be a lot of fun to watch

I think GH will go out of the traditional Valentine’s Day box..
Valentine’s day is not just for couples, it is about love ..
There is a huge variety of love you acknowledgment Valentine cards..
I think this Valentines Days will hold a whole bunch of love in many ways..
I am looking forward to it !!

A traditional- here are your flowers dear now lets have sex is just not story worthy..
It is way too common…. so yeah i’m going to like this twist ..

Sounds like fun! Looking forward to these episodes as well.

I THINK THAT KELLY CAN BE ON ANY SHOW AND BE LIKE TOO. SHE’S ONE OF MY FAVORITE ON GH, SHE’S A BEAUTY, GOOD ACTRESS, AND KNOWS HOW TO LIVE UP TO THE GUYS ON THE SHOW. CAN’T WAIT TO SEE HER IN IT. JUST REMIND US AGAIN. AS ALWAYS, MARY DITANNA PENDRAK.

I agree Mary! I loved her in DWTS and continue to enjoy her on GH!

This sounds all too cute, too gimmicky and something I shall avoid.
Kelly Monaco is a dull actress to me–not all the cleavage and the jeggings in the world will make her interesting.