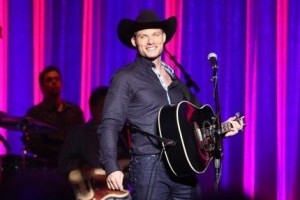 On last night’s second episode of the new season of ABC’s Nashville,  it was in the closet county singer Will (Chris Carmack) who provided plenty of drama with whether he would turn his back on Rayna James’ (Connie Britton) offer to sign with her, making him one of her first two new artists on her record label Highway 65, or whether to take the offer from Edgehill records new conniving boss, Jeff (Oliver Hudson)? After Will turns in a kick-ass performance at the The Stage on Broadway, he  finds Jeff in the audience who wants to chat with hm to steal him away from Rayna’s label.

Jeff says,  “Rayna’s label is like the farm team, and I’m inviting you to the majors. Wanna play?”  But Will is in for a shock when he sees Brent, the gay guy who he punched in the face in the laundry room in last week’s episode outside the club!  In the twist, Jeff tells Will that Brent is on his PR team for the label noting, “Y’all are going to make a great team.”  And with that, it clearly throws Will for a loop of what to do next!

The next morning, Will almost opens up to Gunnar Sam Palladio),  but Gunnar is in his own world trying to figure out how to write some lyrics for a song without Scarlett (Claire Bowen).  Later, after Rayna learns of Will being poached to come join Edgehill records and not sign with her, she talks to Will.   And Rayna tells him what she can offer him … the opportunity to grow and become a true artist!   Next, after Will watches Gunnar perform a beautiful new song he wrote on his own, it seems to have tipped the scale for Will and his decision, but how?

At a party thrown by Jeff  to celebrate the new Edgehill,  Rayna learns that Will went with Edgehill when he walks in the door and hugs Jeff!  He did not even tell Rayna beforehand!

So was the fact that Will is afraid of Brent spilling the beans on him, if he did not sign with Edgehill, one of the deciding factors?  Or, do you think he signed with Edgehill to subconsciously  get closer to Brent?  Do you think as Will related that since he is not a songwriter, just a singer, and he does not have the songwriting skill that Gunnar or others have, that he felt in safer place at a big label?  What did you think of the way Will handled the whole situation in the episode? Weigh-in!

I could care less who Will signs on with.

IMO a far bigger drama is yet to come.

Just wait until Maddie decides she wants to “gets even” with Rayna for lying about who her real father is & decides to sign on Edgehill.