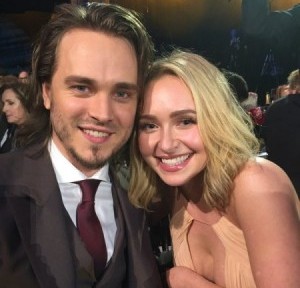 Sunday night on the televised 21st Annual Critics’ Choice Awards honoring the best in television and film in 2015,  two presenters who fans of ABC’s Nashville have missed seeing together on-screen for several months, got their long-awaited moment.

Star crossed lovers, Nashville’s Avery and Juliette, played by Critics’ Choice Award nominees, Jonathan Jackson (Ex- Lucky, GH) and Hayden Panettiere (Ex-GL and OLTL), took to the stage at the Barkar Hangar in Santa Monica, California to present an award. Meanwhile, Jackson tweeted out this image with him and his co-star.  This was Panettiere’s her first U.S. red carpet and public appearance since entering into a rehab facility back in October of last year during her battle with postpartum depression.  Jonathan attended the ceremony with his wife Elisa Vultaggio (Ex-Hannah, GH).

On the red carpet before the ceremonies, Hayden spoke to several reporters including Page Six about her personal struggles where she explained:  “When (you’re told) about postpartum depression, you think it’s ‘I feel negative feelings towards my child, I want to injure or hurt my child’ — I’ve never, ever had those feelings. Some women do. But you don’t realize how broad of a spectrum you can really experience that on.  It’s something that needs to be talked about. Women need to know that they’re not alone, and that it does heal.”

Panettiere told PEOPLE:  “I’ve been hiding myself.  Just putting out the smiling face, showing people this, and allowing that veil to come down — it’s like a weight off my shoulders.”  Being that this was Hayden’s first appearance in front of the press in U.S since fall of last year,  he added she can now enjoy red carpet events: “… so much more because I don’t feel like I have to hide anymore.”

So, where you glad to see Jonathan and Hayden on stage at the awards ceremonies?  Happy to know Hayden is doing much better and that she will soon be seen in all-new episodes of Nashville when the series returns for the second half of its fourth season this spring? Share your thoughts in the comment section below!

Kassie DePaiva Reveals Her Final Days of our Lives Airdate!

Love Hayden and glad she is doing better! Nashville is terrific and My friends and I are anxiously awaiting it’s return!

I’m very glad she’s doing better and will be back on screen. I also wish they had both won the award last night!

Wishing her all the best. Those two are great actors.

LOVE THE SHOW AND FEEL THESE TWO ADD ALOT TO THE CAST……BOTH ARE WONDERFUL ACTORS.