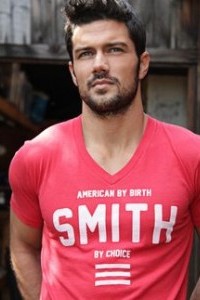 General Hospital’s latest casting addition Ryan Paevey (Nathan West) has already been making a name for himself with his sexy good looks, and now is the unfortunate victim of social media fraud!  Quite quickly after the GH casting news for Paevey made the soap news online, the Twitter account with the handle @Ryan_Paevey showed up and the account holder was following several people within the industry, as well as making up tweets as if they were indeed the actor himself.

Earlier today the management team tweeted from their official account, “SOOOO, it turns out @Ryan_Paevey is not our client RYAN PAEVEY and we are alerting Twitter now that this is an impostor using his name.”

So the question remains, why are people so compelled to pretend to someone they are not, which is an unfortunate syndrome that crops up on Twitter from time to time?  Did you follow the fake Ryan’s account?  Are you looking forward to following the real Mr. Paevey’s tweets?  Let us know!

Next Week On DAYS: EJ and Abigail Have Sex? Watch the Promo!

Downton Abbey Executive Producer Previews What To Watch For In Season Four!

He and Elizabeth would make a great couple…however, i did see a look in Maxi’s eye that says’Spinneli who?’…lol

Sometimes i wonder if some of this is a publicity stunt…just saying!!!

He is a future movie star…

I doubt this is a publicity stunt. Ryan will get plenty of attention on GH. He is gorgeous and you are prolly right…. Ryan is a great prospect for Hollywood. Let’s enjoy a year of his acting and hopefully he will be ready for offers to star in some romantic movies.

He also kinda reminds me of the late Paul Walker…imo

I agree about him having “movie star” looks. I actually checked him out online to see where he’s been all this time ( he is 29 yrs old) and of course he’s been modeling since high school with some film credit Birds of a Feather (2011) and The Girl with the Gloves (2011). I guess you never know who is going to really make it on the “big” screen. The first time I saw Josh Duhamel on AMC I just knew he was the next big film star, and while he’s done quite a bit of work since leaving AMC,… Read more »

That is the first thing I thought too. he looks exactly like Paul! Hair color change is about it. Oh yes, PW had blue eyes. He would have been a great candidate to portray him for the last F&F. But he was already involved in GH I suppose.

it’s that black hair and blue eyes thing GOING ON

and on and on

I thought so too. Maybe they should have had him take over for Paul Walker.

I think it is sad when that happen’s. This morning on twitter. “soap central .com” I clicked on 2013 people of the year & it took my whole computer down. A Virus!! I was so mad! I needed a computer tec come in and get it out.

I don’t tweet but my heart started twittering as soon as I saw Ryan’s debut on GH. I had to actively tell my heart to be still. Yes indeed. I haven’t felt like that about a new male actor in ages. For the short amount of time he appeared, I think he is definitely bringing some acting skills to the table, and so far has noticeably good chemistry with Maxie. ( something to look forward to after she eats, prays and finds love back in PC).

I had to laugh when he had a towel scene within a couple days of his debut! He’s super-super-hot. Seems like he can act, too, but I have to admit to being mesmerized a bit too much to be objective!

I am completely not objective when an actor with his presence makes my body go crazy!

And I was glad to have received a response LOL!

I did follow the fake twitter account. Then things took a strange twist with another follower and it seemed very childish and crazy.. then woke today and found it was a fake.. just seems sad to me that someone would be that crazy and desperate..

I too was a victim of the fake Ryan Paevey twitter account. I definitely can not wait to start following the real Mr. Paevey’s tweets. It’s just sad to see that certain people have nothing better to do but pretend to be someone else.

Damn! I knew when he followed me it was too good to be true!

The person behind the impersonating Ryan account, their name is Holly. They were casting the blame off on a Brianna girl as well as soapfan31 but Holly has been a long time stalker of both of them. The way she was desperately trying to pass the blame onto those 2 made it obvious that it was HollysHere behind it and no one else.

The scene from Fridays show where Anna vets him was amazing.