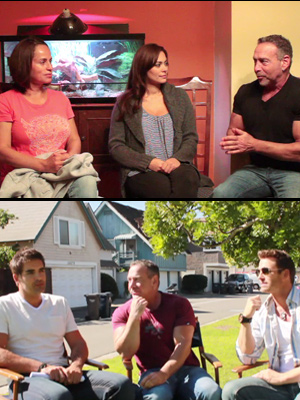 Missing Venice the Series as much as we are?  Now the series V-Shop has three new video interviews available to fans of the series!

First, On-Air On-Soaps Michael Fairman sat down with series star, and creator/writer/producer Crystal Chappell, and co-star Jessica Leccia for a very candid interview after a long day of shooting on the set of Venice season 3.   During  the video interview, Chappell and Leccia talk about Gina and Ani’s relationship and the complexities that develop within their story.  Will they finally get back together in season four?  Well, only Chappell knows for sure!

In addition to the long-awaited Chappell and Leccia interview, there is also a brand new interview posted with Days of our Lives stars, Galen Gering and Eric Martsolf, who on Venice, play rivals, Owen and Van!  The two discuss with Fairman the twists and turns in their on-screen relationship, and of course, there are plenty of laughs during the interview, too!

There is also a new one-on-one chat with Annika Noelle, the young actress who came in and took the place of Gina Tognoni in the key role of Sami.  Annika talks with Michael about how she ended up being cast on Venice, and the opportunity she was given to play the darker side of  Sami and the  journey the character takes in season three.

The videos are available for a limited time via download purchase, and you can find them in the Venice V-Shop under the VTS Season 3 Special Features Icon.

Who Would You Cast As The New Grayson Son Coming to REVENGE on Season Two?

Eileen Davidson Speaks For The First Time On Her Return To Days Of Our Lives!

Let me get this straight….we now have to purchase a download to watch a behind the scenes interview??? Did I read this correctly? I know the online soaps need funds but this is seriously tacky.

I agree Robbyrob. They are asking people to pay for what are essentially marketing/promo videos. They saw a demand when people started asking for the interviews after hearing about them. Then they decided to try to capitalize off of the perceived demand. I think it is absolutely ridiculous. When you try to monetize everything, there will be backlash. People only have so much money to spend to support a webseries. Venice has subscriptions, sponsorships, merchandise, music, etc. That is plenty of opportunity to make money off the fans. Enough is enough.

As much as I love this web series I am gonna have to agree with you guys.

I would happily pay to watch the CC and JL interview but it doesn’t seem to be in the VShop any more. Does anyone know where I can watch it?