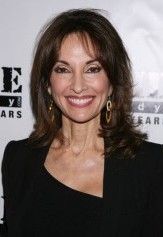 Yesterday the Associated Press broke the news that our beloved La Lucci of All My Children, will be writing her own memoirs coming next year.  Today the official annoucement was made via offical release below!

“It Books, an imprint of HarperCollins Publishers,  announced today that it will publish television legend Susan Lucci’s autobiography in 2011. As the most famous face in daytime television history, Lucci has held audiences spellbound for years as the sexy, sassy, beautiful “woman you love to hate,” Erica Kane on ABC-TV’s All My Children.

The book was acquired by Lisa Sharkey, Senior Vice President and Director of Creative Development for HarperCollins from Mel Berger of William Morris Endeavor. The book will be edited by It Books Vice President and Executive Editor, Hope Innelli.   In her autobiography Lucci will recount her forty year-long career on All My Children, playing the beautiful and controversial character. As Erica Kane, Lucci has experienced many intense moments on screen: married many times on air, was one of daytime’s first working mothers, and has dealt with many of life’s greatest tragedies. In addition to providing readers with an exciting and satisfying behind the scenes look at her career, Lucci will devote much of the book to her personal life off-camera.  Lucci will reveal information on her devastating car accident, her miscarriage, and the joy that came with finally winning an Emmy in 1999 after eighteen previous nominations. She recounts her experiences on Broadway, performing to sold-out audiences across the country as a cabaret, nightclub performer, and as a celebrity dancer on ABC’s Dancing with the Stars. Named one of Barbara Walters’ “Ten Most Fascinating People,” Lucci will give readers an intimate look into her life as a daughter, wife, mother, grandmother, philanthropist, entrepreneur and iconic actress.  “I am so excited to share my life experiences with my fans,” Susan Lucci said.  “It Books gave me the extraordinary opportunity to tell my story.”

BREAKING NEWS: Melissa Reeves back on contract with DAYS!

On the Edge with GH's Geary, Monaco & AMC's Lucci to be broadcast in major markets!