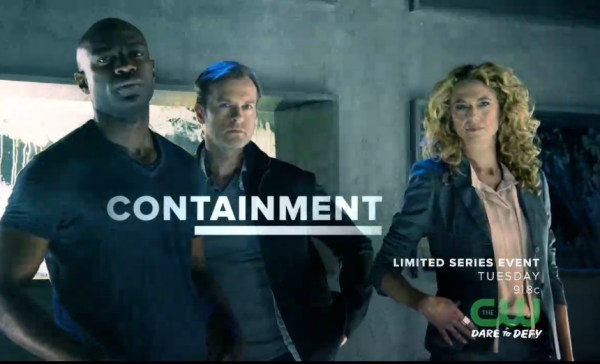 Tuesday night on the CW is the premiere of Containment (9pMEST/PST). The drama focuses on a pandemic and the officials charged with controlling the crisis and those quarantined and cut off from their loved ones.

From Vampire Diaries EP Julie Plec and director David Nutter, the series opens up on  “Day 13” of the crisis, with a flashback to “Day 1,” when the epidemic strikes, and authorities quickly move to mitigate the threat by isolating those who were potentially exposed.

CW describes the show as an “event series,” and it’s leaving the door open for the program to continue on if it is successful with the audience, although some early reviews have not been so favorable.

In an interview with Access Hollywood, St. John previews his character of Leo, an investigative journalist who is key to the series.  St. John admits:  “I love playing characters who don’t quite know right from wrong …  some boundary issues.  All they know is what they want and they go straight for it.  Those are the interesting characters.”   And as One Life to Live fans know, St. John played Todd Manning, who eventually turned out to be Victor Lord Jr., who inhabited those same character traits.

After the jump, watch the Access Hollywood red carpet chitchat with Trevor, and then a trailer for Containment.   Let us know if you will be checking out the outbreak drama to see Trevor!

I put it in my favorites, last week..
I will give it the 4 episode look-see, if I keep up with or not..
So far by the trailers- TSJ looks like the best part …. lol

Trevor St. John is a super actor and I’ve been looking forward to this program because of him. I hope we get to see a great deal of him.

Thanks Steve. I usually DVR ‘Castle’, but, there have been many episodes which I omit.

And unfortunately for Castle fans, Stana Katic have been let go from the show if ever it gets renewed for a ninth season.

You are most welcome, CeeCee.

@James.
Awwww!! Really, James? What a big let-down. The show will not be the same without her, if it does get picked up again.

I love Bree Williamson. She did a terrific job playing the adult Jessica on OLTL. Thanks for letting us know.

hey CeeCee..
in the;
Outstanding Actress In A Digital Daytime Drama Series Nominated Performances!
Did you see; Kathleen Gati (Valentina) Winterthorne??(doc.o)
wow and WOW!
I noticed no comment for you 🙁 ..

Thanks, su. I completely missed that site. Always in a hurry. Can’t you tell by the ‘autocorrect’? LOL.
However, I remedied that and left my comment.

mmmmm I have missed seeing that stud every day on One Life To Live. I will have to watch him in this.

This guy should be a movie star. His death penelty story years ago was the best thing I ever saw on TV , never mind daytime. He should have won an Emmy that year. Walking into the role of Todd would have been suicide to another lessor actor. He had his own with all those sosp vets.