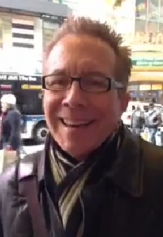 New One Life to Live co-header Thom Racina is busy at work in Stamford, Connecticut, the new studio home of Llanview, creating new stories for your favorite characters along with Susie Bedsow Horgan!

Racina posted a very special video message to his fans this evening on his facebook page, which gives a bit of tease and insight into the direction of Prospect Park’s One Life reboot!

The scribe stated, “All shows say they want to tell new bold innovative exciting stories. Well, I promise you we’re gonna do it.  It’s a whole new format. It’s a whole new world. And I’m really grateful to be here.”

Watch the message after the jump and then let us know if you are excited by Thom’s statements?

Tainted Dreams Creator Sonia Blangiardo: "I Was Struck By The Loss Of This Unique Art Form That Had Been Integral To NYC!" Casts RHONJ Dina Manzo in Role!

As long as we can get Todd back in his penthouse, I’m happy. 😉

just because some/most want him back does mean he wants to be with PP online ..

I read that Prospect Park is going to let ABC keep the characters.

BOTH R.H. and TSJ declined PP’s last invitation to go on line with them. I think there will be NO TOD or VICTOR even though the cliffhanger had him ALIVE at end of OLTL. sad 🙁

it’s always possible that Todd or Victor will be a recast on OLTL. If we get to keep the name of Todd Manning on GH, then I’d guess they’d have at least Victor found on OLTL since that was part of the cliffhanger.

I am so thrilled to Thom for posting this video. I hope he will continue these little teasers right up to the time the show hits the web.

Love it. Yes, bring both Todds back and the show will be very bold and innovative!!

Both Todd’s would be great!!!

I love his excitement and enthusiasm! I appreciate him taking the time out to say something to fans. Looking forward to what’s ahead in Pine Valley and Llandview!

I want Todd to stay at GH..
That is why the writers will give him a different name (other than Todd Manning) so he can stay in GH until all is settled..
I have thought about it and that is where they are going..
Todd will fake (again) DID and become ‘whomever’ and thus not being the Todd character that PP owns but a different name/character.. .
and when all is legally settled over the characters, and GH wins,, he will become Todd again..

They must bring the vets to the forefront of the show and not try to cram a bunch of younger newbies down our throats or the show will fail !

OL will now be on internet and via Smart Tv’s and internet devices, apps etc..
Yes, they do indeed want to attract new and younger viewers..
The seniors are not the priority:) of course they want all fans back, no doubt of that, but they also want and need a new audience..
It is no longer all about us 🙁 it is about the down the road future to PP ..

Im a fan of OLTL & GH, but leave Star, John,& Todd on GH. I like them on GH, & love their stories, I can actually stand Star now.

I JUST WANT TREOR BACK AS VICTOR, TO BE WITH TEA SAM AND JACK HOPE JACK AND STARR NEVER FORGIVE TODD

Love it. OLTL is the future, yet structured and centered around the classic, traditional soap genre. Fans are ready for April! Let the countdown begin!

I tell you what. My birthday’s in April and I can’t think of a better present to myself than a reboot of OLTL. Please start it on April 8.

I feel the war of the two Todds(1 really twin named Victor) would have been dynamite drama for the show but i doubt either will return plus i havent heard either actor agreeing to return to what isnt proven successful just yet. I want them to succeed but what if some fans dont like what they see and the shows dont meet PP expectaions. These shows may start out with a bang with some watching out of curiousity but that dont mean theyll stick with it and we could loose it again. I want them back and do have high… Read more »

everyone needs to realize a lot of these actors have moved on, no fault of their own. Who would have thought these shows would be resurrected a year later? I dont blame any of them if they dont come back. There is something to be said about the half hour format, look at B&B and as awful as the writing and acting has become on that show its the most watched soap in the world. Go figure. Theres a good chance if these shows succeed online they may get a cable network to air them. bottom line, good writing plus… Read more »

i hope they do crossovers too. it worked in the past and even on two different networks.

I am excited about OLTL returning. (I still am not sure it is actually happening!) I am ready, too, for changes in Llanview. I do not expect to see on Prospect Park what I saw on ABC. Not everyone is going to return and we may have recasts or explanations that characters have left Llanview. I expect will we see a leaner, tighter production — already 30 minutes instead of 60 ticks. I expect a diffierent Llanview in that the producers and writers are now at GH. But we will see OLTL again and many familiar faces seem to be… Read more »

Appreciate the enthusiasm. Thom sounds as excited to write as we are to watch

I take issue with his comment about being shot in Times Square. New York City is one of the safest cities in the world. A comment like that is not only inaccurate but perpetuates the stereotypes of the big city that people have concerning NYC. If that’s him being bold and exciting, I don’t think I’ll be tuning in.

I want the John McBain Character back to OLTL, he belongs with Natalie not Sam on GH. I feel FV/RC butchered the “JOLIE” story for GH ratings. I understand Michael Easton probably won’t come back, but OLTL won’t be for me if there is no JOLIE! Won’t be watching GH either, since I can’t stand to watch now.

no way do I want to see McBian becoming paint on wall with Natalie, they are a boring couple and not even hot lol
they were broken up/done when OL got canceled but to appease for the happy ever after stuff they were thrown together once again at the end:)
ME/John is alive and the best I have seen being in 10yrs,, He is awesome and vivid on GH.. GH gave him life!!
OLTL will just make him Nats pet .. John is not a family man.. he never has been and never should be a family man 🙂

So that goes for GH too right, no family. I guess he will have to find someone other than Sam then because she has Danny now. I hope John is back on OLTL and back together with Natalie and Liam where he belongs not playing vampire over on GH.

I just wanted to thank you for bringing our soap families back to life. I been a avid soap fan since the late 70’s and the last year was a bore without them. I can’t wait to watch them and just wanted to thank you again for all your hard work! I’m on several save the soap sites and know lots of people are thrilled to see our beloved soaps again. Much love and success from Texas! Always a fan Janna Johnson