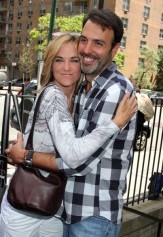 Yesterday, a fantastic group of fans gathered together out front of One Life to Live’s studio in New York City to celebrate and pay tribute to their favorite daytime drama as OLTL celebrated its 43rd anniversary.

One Life to Live first aired on July 15, 1968 and some 43 years later and amidst the emotional ups and downs for the cast and crew and its long time fans over the last several months, with the network cancellation and then the stunning announcement that the show will eventually move to the Internet, a good time was had by all.

View our photo gallery of the event with an awesome display of love for Llanview after the jump!

Kimberlin Brown joins the cast of "The Bay"!

Dillon Casey up next in "Torchwood: Miracle Day" and then "Nikita"!

a BIG thanks to Ilene Kristen and David Gregory who stopped by on their day off… we surprised Gina (or she surprised us, as she stopped by to pick up some wardrobe) it was a wonderful day… the cast & crew of OLTL are the BEST… and I’m glad we had the opportunity to share some love with them yesterday! :o) super special moment (one of many) Kassie DePaiva came outside and someone asked her to sing the OLTL theme song… she started it off and we all joined in… Bob Woods pointed out to us that yesterday also was… Read more »

that weird face is supposed to be a 🙂

Also, here’s a great original song written and performed by Stacey Handler at the OLTL Anniv. Party… with interpretive dancing provided by Fred, who also pulled Ilene Kristen into the fun…. that Fred, he’s some dancer!!!
http://youtu.be/mQBVL-rWiHE

I wish I could have been there. OLTL is my favorite show!

I noticed Patricia Elliott at about 3:22 on the video. Does that mean she was at the studio that day to be on the show, I hope so!

You know every time a soap gets axed you bring all the characters back you wrote out for what purpose? Maybe they might try figureing out that’s why they get cancelled. Bring on new faces you don’t care about like the Ford Brothers. Then we top it off with 8 years of Trevor St. John not really being Todd. As Eric Braeden says Too many cooks in the kitchen. Sad demise of what used to be an escape for everybody now is like a bad train wreck!

You forgot Bo, Nora, Renee, Todd, ….Robert, Hilary, Pat, Roger and more were there too!