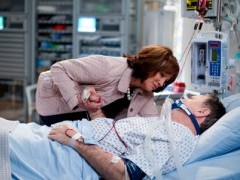 One Life to Live’s, Hillary B. Smith,(Nora) revealed at Saturday’s Stagecoach Festival Soap Nation event that the date is set for Bo and Nora’s wedding, and there will not be an easy road to the altar.   Smith told SOAPnet.com, “I can’t tell you too much about what’s going to happen, except to say that it’s mishap after mishap, and that it all takes place on June 1st. Which is the day that Bo and Nora were married originally!”

SOAPnet.com also revealed that they are hearing rumblings that a brand new family could be coming to Llanview sometime this summer!   Who could they be related to?  Anyone?  Stay tuned!

I love Bo and Nora, this is awesome news!!!

Honestly! Who wants a brand new family, when OLTL had a beautiful new family in the making – aka KISHIERRA – but decided to throw her overboard…

I thought 6 weeks after the KISH KILL my anger would have lessened, but not so.

YEAH! Bo and Nora are THE BEST of THE BEST!

So OLTL got rid of Kish (and the Kishierra family) for budget reasons (or “because they didn’t resonate with mainstream” reasons, or whatever reason they have this week for axing Kish), but now they all of a sudden have the money to bring on a whole new family, not to mention several newbies that have been added recently after Scott, Brett, SC, Daphne Duplaix, etc. were unceremoneously DUMPED by OLTL! I totally agree …… who in the hell wants another brand new family in Llanview when they had one of the most beautiful families they could have ever wanted with Kish and Sierra, but decided to run them out of town (and lost thousands of viewers in doing so).

I guess they didn’t “fit the mold” to live in bigoted KLANVIEW so they tossed them away like yesterday’s garbage. Too bad too, because Oliver looked 100% better in his police uniform than Brody does, and Kyle looked 100% better in his doctor’s coat than Greg does. AND, nobody on the show even comes close to being as cute as little Sierra Rose. Yes, OLTL tossed away the most beautiful family they could ever hope to have on the show. SOOOOOO MUCH POTENTIAL THERE.

As far as I am concerned, KLANVIEW can have its 2-time rapist, Ford-ho, Langston-ho, shacked-up teens, illegitimate babies, incestuous relationships, 30+ year-old “teenage” wannabe, whiney pathetic Marty, pathetically horrendous Gigi (the bimbo with no talent at all), and her chosen one, WRECKS, the former son of Roxy who is now just a human spud conceived via Emmaculate Conception and has no parents, etc, etc.

How much you wanna bet that new family coming to Klanview will be LILY WHITE and totally HETEROSEXUAL!!

Yes, I am a middle-aged, white, heterosexual married female and I want my gay couple (Kish) back and more ethnic diversity on the show! As far as Gigi goes, she should just go back to McDonald’s and flip hamburgers for a living because she is no actress and is about as interesting as watching paint dry. JMHO