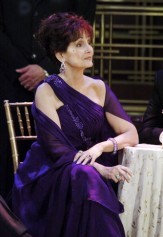 One Life to Live’s devilish Dorian Lord,  played by the incomparable Robin Strasser is about to be the ultimate holiday pranskter when she sets up Echo DiSavoy, the fabulous Kim Zimmer as a bit of karma pay-back when there is a Santa suit left on Dorian’s rooftop.  According to Strasser’s new chitchat with TV Guide, the upcoming December 22nd episode looks like a hoot and half!  Here are a few excerpts on that, and Strasser working with both, Erika Slezak (Viki) and Zimmer.

Strasser on why the Santa suit and how Zimmer comes down the chimney! “Because she puts it there! This is Dorian’s special Christmas present to Viki. Echo is looking for photography work so Dorian cons her into thinking she’ll be shooting the official mayoral calendar, which involves Dorian wearing a Santa suit. They go up on the roof to shoot the thing and suddenly Dorian says, “Oops, forgot something down stairs! Be right back!” And she leaves Echo, who is not wearing a coat, locked and stranded up on the roof. It’s freezing so Echo has no choice but to put on the suit, and the only way down is — of course! — the chimney, which is naturally full of soot. Isn’t it funny how things work out? And aren’t we lucky that the woman is Kim Zimmer? That woman can do anything.”

Strasser on OLTL, when asked that they are having an embarrassment of riches when it comes to all three Daytime Emmy winning actresses in scenes together:  “Bitches? [Laughs] Did I say that? No, seriously, this has been fantastic for us all. Erika Slezak is very smart. I admit that when I first heard about Kim, I went to Erika and was like, “Uh, what’s up with this?” But she was totally cool about it. She said, “Oh, this is going to create lots of great story for us.” And sure enough it did! When I first stepped on the set with Kim, I was instantly taken with her natural energy, her humor and her style, her tremendous timing, and suddenly I felt like, “O-kaaaay. This is going to be great! We get to play!” So it turned out terrific in this case…but one never knows.”

Will Katie Couric be the next to throw her hat in the daytime talkfest arena?