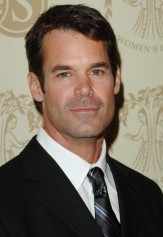 Tonight, On-Air On-Soaps found out by way of Tuc’s peeps some very cool news! And that is, Tuc Watkins is going to be moonlighting from his recurring day gig on a soap to perform in a new comedy play in Manhattan. One Life to Live’s fabulous, David Vickers has just replaced Scott Patterson who opted out due to a TV Pilot.  Watkins will join the play which already stars, Betty Buckley and Peter Scolari.

The show titled, White’s Lies gives an enticing set-up for theatre goers: “Some guys are scared stiff at the prospect of settling down, getting married, having kids…and Joe White is no exception. He’s a divorce lawyer, representing one of his many ex-girlfriends, and above all else, he’s a bachelor who wouldn’t have it any other way. So when his mother desperately wants him to start a family, he’ll do the next best thing: make one up. What could go wrong?”

Check out White’s Lies official website and Playbill.com for the update on Tuc as the latest addition in the cast.  And,  if you are in or going to be in the New York City area and want to see the show it’s at the New World Stages located at 340 West 50th Street.  Performances begin on April 12, 2010. Check the show’s website for ticket prices.