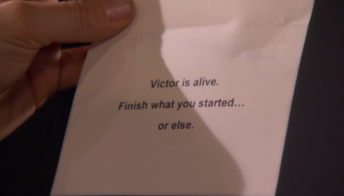 On Tuesday’s episode of One Life to Live on Hulu and iTunes, someone is keeping surveillance on the entire Lord/Manning clan!  Who is behind this?

That is the question that grows even bigger when Todd Manning (Roger Howarth), reveals the invitation that has the same emblem as Victor Jr.’s (Trevor St. John) mysterious tattoo at the shocking end of today’s episode!

In addition,  Matthew (Robert Gorrie) seems to be convinced that “Michelle” is for real?  Is he falling for a catfishing scheme?   Natalie (Melissa Archer) and Cutter’s (Josh Kelly) growing attraction is about to reach the boiling point if her invitation for dinner to the club owner, ends up in the bedroom instead of in the kitchen!

And our favorite line of the episode was uttered by Tuc Watkins as David Vickers, who had Rama all a ga-ga! Rama  (Shenaz Treasury) was very impressed with David’s reality series and his fame! When taping a segment for his show and getting close to Rama, he says:  ” You know, maybe we should move this over to a Boobs, I mean Booth!”   Is David going to be enticed to hit the hay with Rama?

Watch today’s episode of One Life to Live after the jump! Then, let us know who you think is pulling the strings that wants Victor Jr. dead?

I think it ‘Mama’ that’s behind it all!

IRENE MAY BE STILL ALIVE ,AND THE BLACK OPS ARE TELLING HIM TO FINISH KILLING VICTOR ,

Well that note finally explains why Todd was not at all surprised when Victor showed up at the hospital when Dani OD’.

I am thinking it will be Irene or Mitch Laurence. Either one is certainly capable.

I would think it is Irene behind it all as se is more related to this story between the brothers than Mitch was………….

I could stand a little less outlandish plotting. Let’s finish the crazy and get back to a slightly closer sense of reality in our storytelling. I do love the actors and the operatic over-the-top machinations, but I am honestly tired of it. I want some closure and some new directions for these characters.

I wonder if it’s Irene or Baker, her man from the rogue agency, or Tomas. Tomas is a real possibility. He never liked Tea having anything to do with Victor.

What about Allison Perkins, she is crazy enough to have all of those Camaras up in Llanfair, La Boulie, Matthew’s Apartment and Victor’s House.

Allison is crazy enough, but she always seemed to be an order taker than the giver to me.

She also seemed very impulsive as well, kind of like when she shot Viki and Clint, so I wouldn’t put something like this past her.

They already showed that Todd has all those cameras in place. My thinking is because he rebelled against the order to finish the job and with the cameras Todd can make sure all his loved ones stay safe!

I love a good mystery and this is a good one..
I am waiting to find out the secrets and surprises..
And anybody who reads the spoilers on this are Idiots ..

spoilers on a whodunit should be outlawed !!
Thy have a way of bleeding into the spoil free zone.

There is that chance that Irene is still alive (Todd nor Victor seem to be able to kill-kill a family member lol) and continued with her plotting, although I don’t see why she would want Victor dead since he was her favorite, unless (and I know RH fans would hate this even being suggested) Victor IS really Todd and Todd is Victor. Irene never explained why she would give Victor Todd’s scar just to have him get face surgery, and I questioned if she herself could of mixed them up before the surgery.

Then Mitch Lawrence is a possibility although without Jessica to kidnap him coming back from Hell seems pointless. My last idea is Victor Sr. I don’t know if PP would be willing to bring him back from the dead, but that would explain why the whole Manning/Lord family is being watched.

Lets go back to the beginning! Irene switched Todd and victor, that is true but does anybody remember her saying she changed victors face to look like walker Lawrence, Mitch’s son? The also tea found victor already dead after being shot! Even the mortician pronounced him dead! What if this victor isn’t even victor, what if its the missing son of Mitch Lawrence? What if its walker? Remember, Allison didn’t work for Irene, she worked for Mitch! So maybe Todd really did kill victor and this is the real walker Lawrence who’s been brainwashed!