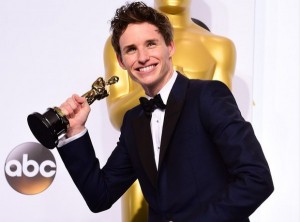 Now this could be truly incredible – both for new Academy Award winner, Eddie Redmayne (The Theory of Everything) – and for the long running Australian soap opera Neighbours!  In fact, rumors are persisting that Redmayne may make a cameo appearance in the soap opera’s upcoming 30th anniversary episodes later this month!

It all started when after winning Best Actor at the 87th Academy Awards, Redmayne praised long-running Neighbours stars: Alan Fletcher (who stars as Dr Karl Kennedy) and Jackie Woodburne (who plays Susan Kennedy). “I think they’re amazing,” Eddie related. “I’m a huge fan of them from old.  I’ve learned a lot from them from watching them daily.”

Redmayne also told Elle UK, “They are the greatest unsung acting duo in history. Watch, and you’ll find that everything they do is on another level of genius. I really do think so.”  He also revealed he would have stage fright if he ever got to work with Woodburne and Fletcher!

Apparently, all of this was not lost on Neighbours series producer Jason Herbison, who got wind of Eddie’s love for the fictional Kennedy’s of Ramsay Street and said to Australia’s The Sun: ‘If we could cap off an incredible year for Eddie by writing a guest role, however big or small, it would be our privilege.  I would ensure he moves into the Kennedys’ – they are renowned for hospitality.’

So what do you think? Will Eddie get the chance to act with his acting idols from the Australian soap opera?  What do you think of Eddie’s passion for the soap duo, and the cameo offer? Comment below!
Related Topics:87th Annual Academy AwardsAlan FletcherEddie RedmayneJackie WoodburneJason HerbisonNeighboursThe Theory of Everything
Up Next

Linsey Godfrey Back To B&B: "Yes I'm Headed Back To Work For A Day This Week And I'm Very Excited!"

I think it would be incredibly fun! Who wouldn’t want to move in with the Kennedy’s?!
I started watching Neighbours & Coronation Street after AMC & OLTL were cancelled! They are both on hulu now, I never miss an episode!

Coronation Street is currently my favorite series…so down to earth and realistic with its character driven middle class working families…Tracy is my favorite villain…the show has humor and no silly campy stuff…children act like children and age normally unlike that ridiculous fast aging on our American soaps…dead are really dead but i wish Tina could come back…i will miss Deidre with the passing of A.K. in reallife…i see Ken and Audrey becoming a couple…cheers!

Accolades from such a brilliant actor does well for the genre…they’d be incredibly lucky if he agreed to a cameo.