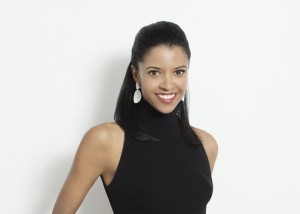 While many of the original Broadway cast of The Tony-Award winning Hamilton including: Lin-Manuel Miranda, Phillipa Soo, and Leslie Odom Jr., just departed the musical sensation, now comes word that former One Life to Live star, Renee Elise Goldsberry (Ex-Evangeline) is about to take her final bow in her Tony-Award winning role as Angelica Schuyler.

The talented Goldsberry is exiting this fall to star inthe new Netfilix’s original series, Altered Carbon! According to the Hollywood Reporter, Renee will appear in the 10-episode sci-fi drama from Skydance Television starring Joel Kinnaman.

Renee will play the role of Quellcrist Falconer, a revolutionary and leader of the rebellion against the Protectorate. She is a master strategist, as well as the love of Kovacs’ (Kinnaman) life.

As for the story set-up: set in the 25th century and based on Richard Morgan’s 2002 novel of the same name, the series explores what happens when the human mind becomes digitized and the soul is transferable from one body to another. Kinnaman who plays Takeshi Kovacs, is an ex-elite interstellar warrior known as an Envoy who has been imprisoned for 500 years and is downloaded into a future he had tried to stop. If he can solve a single murder in a world where technology has made death nearly obsolete, he will get a chance at a new life on Earth.

What do you think of Renee’s new TV role? Have you had the opportunity to see her in Hamilton? Share your thoughts in the comment section below!

More congratulations for Renee. She is such a multi-talented entertainer which she most definitely proved on One Life to Live. This new role sounds fascinating. I don’t subscribe to Netflix but may have to consider it.

Sounds too complicated and of no interest to me.

YAY for Renee! She’s such a talent!

I’m not a sci-fi fan, but I love that Renee takes on all kinds of projects! Plus, Joel Kinnamon is a cutie, so I’m sure they’ll look SUPERB together as an on-screen couple!

Now if only Frank Valentini could somehow lure REG back to ABC for a short, but meaningful, stint on GH. She’d be IDEAL as Dr. Hamilton Finn’s “presumed dead” wife! Michael Easton and Renee Goldsberry would be reunited again, and that would spell PERFECTION!