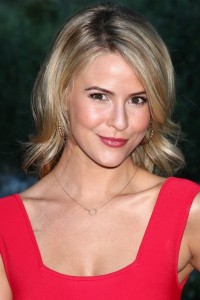 Terrible news to report this evening as reports are circulating on the Internet, and one in particular from TMZ, which has that The Bold and the Beautiful star Linsey Godfrey (Caroline) was stuck by a car this afternoon at around 2:30PM.

According to the report: Godfrey was run over by a car Monday in L.A. while she was walking down a sidewalk.  Police told the entertainment news outlet that Linsey was pinned underneath the car. When emergency responders arrived, a citizen had already moved her from the wreckage,  and she was rushed to the hospital by ambulance.

The account goes on to say, that the car that hit Godfrey veered onto the sidewalk after getting into an accident with another vehicle.  Neither driver was arrested.

Cops told TMZ, that the actress and new mom, suffered 2 broken legs, and she went to surgery.  However, tonight Hollywood Highlight’s Tommy Garrett is reporting that he spoke with Linsey’s manager and the actress is out of surgery, and the injuries were not as severe and were only to her ankles.  The outlet is reporting that Lindsey’s doctor is saying that the beautiful and talented actress, who is heavy in storyline on the CBS daytime drama series will make a complete recovery.

On-Air On-Soaps will keep you updated on this developing story as updates on the situation come to light.

Share your well-wishes for a speedy recovery for Linsey below!

Y&R's Robert Adamson's Update On Linsey Godrey's Condition: "She's Been Through Worse Than This And She'll Be Back On Her Feet Before We All Know It"

I hope she will be okay. Such a terrible thing to happen. That being said I hope her character on Bold and the Beautiful does not sleep with Ridge anymore I found it disgusting she could be his grandchild

I have to agree with kim…on her and ridge DISGUSTING. Get better quick..Lindsay. we love you

So sorry to hear this news. Wishing Linsey a full and speedy recovery. Praying for she and her family.

prayers for you & your family. Be strong.

My thoughts and prayers are with Linsey and her family.

So sorry to hear this, but I’m glad it was not as bad as we had originally thought. Prayers for her and her family.

Love and prayers are sent to Linsey and her family!

Glad she is goin to be ok…

So sorry to hear that she was hit by a car praying for a speedy recovery.

Best wishes for a full and speedy recovery

Thank God! So happy to hear she will make a full recovery. She’s given us great entertainment though outstanding performances. I just love her!! Praying that the pain is under control and she receives much comfort and TLC!!!

How horrible! Thank God, Linsey, you will make a full recovery. Our prayers are with you.

If any of you would like to send Linsey Godfrey a get well card, here’s the address:

wishing you a speedy recovery

My beautiful Darling Linsey. Sending lots of love!! I hope , you will be there soon and show the old lady, you are Number 1 for Ridge. !!!!!!!!

Prayers for this beautiful lady.

Get well soon Lindsey you will be missed

Have mercy, God is good. Be strong, blessings on u and & your family. Take care of yourself.

How awful. Best wishes for Linsey. She’s doing a great job on the show. Just hope she’ll be okay.

So very sorry for what you have been through, my first thought, was the baby with you, glad to hear not, get well soon.

Glad to know you are alright and it is not as bad as it could have been. I hope you heal quickly. you are blessed.

May God take away your pain . I’m so sorry wishing yo

Best wishes & prayers for a speedy recovery. God bless you Linsey. You are a loved actress.

Linsey love and prayers to you . May you have a speedy recovery.

Linsey,
I am representing some “General Hospital” fans and we want to wish you well and a speedy recovery.
No matter what show you are on, we are all human with feelings.
Get Well Soon…

so-so sorry Linsey – hope you are back at B&B real soon. Rooting for your speedy recovery.

Linsey, my thoughts and prayers go out to you for a speedy recovery. At first the news was pretty bad as to the broken bones, but it turns out it is your ankles and not your legs. But no matter what, hope you are home very soon and have a complete recovery. Love you on The B & B!

so sorry linsey! love you and robert and your sweet baby and hope you recover soon!!!!!!!!!!!

So sad to read this. But happy her injuries are not life threatening. However two broken ankles with a little one is going to be hard. Hope her and her family read all the good wishes to her and her family. Your great on B&B!

SO SORRY TO HEAR OF THIS TERRIBLE ACCIDENT….MY THOUGHTS AND PRAYERS ARE WITH YOU AND YOUR FAMILY….HOPE ALL GOES WELL AND YOU WILL RETURN TO THE GREAT JOB YOU AR DOING ON B&B…VERY SOON.

So sorry this happened to her & wishing her the best in recovery. I am very surprised that she had a baby last June & with Noah from Y&R? Where have I been! B&B did a great job of hiding the pregnancy!

So sorry to hear this. Saying a prayer for you and your family.

Sad news….praying for a speedy recovery. .Love the storyline with her and Ridge…love love it…..

get well Caroline,love you.my I love seeing you everyday on the show Bold and Beautiful-

I have been a fan of your show since the beginning. I wish you a speedy recovery and can’t wait for you to return on the show I love your bubbly personality. Good Luck in your recovery.

Hi Linsey,
I’m so happy you are home with your family. i hated to hear you were in hospital.

Sending you love and a speedy recovery. can’t wait to see you on Bold and Beautiful take your time recovering. i miss caroline

Linsey, I watch Bold and Beautiful every day. Sorry to hear about your accident. Best of luck with your recovery. Glad that you weren’t hurt worse than you were. I will say a prayer for you.