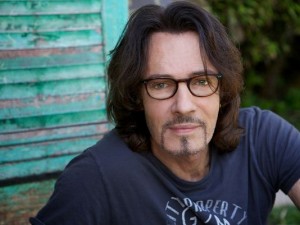 It’s a big week for former General Hospital star, Rick Springfield (Noah Drake/Eli Love)! His first novel Magnificent Vibration is being released today, and on Friday the rocker will be get his own star on the Walk of Fame in Hollywood in a special induction ceremony that will have on hand none other than GH’s Jason Thompson (Patrick)!  Fans can watch the live stream of the event here.

But first the release of Springfield’s novel, which comes after his memoir, Late Late at Night.  The story centers on  Horatio “Bobby” Cotton who finds the number 1-800-CALL-GOD scrawled inside a stolen self-improvement book, he can’t help but dial.  That call sets off a free-wheeling, fast-paced journey in Springfield’s sometimes irreverent, often thoughtful debut novel Magnificent Vibration!

When speaking to Fox News about the book, Springfield revealed how it came about, “I was home in Australia with Mum visiting over Christmas and I had this idea that God talks to me and started writing these conversations between this guy and God. I started out with this guy having a phone conversation with God and God turned out to be quite different than the punishing Old Testament figure or the benevolent Father and it just had a humorous tone to it. Basically it just went from there.”

Springfield also revealed the book has a lot of his own interests  peppered within the story:  “It has the Loch Ness monster, which I loved as a kid, and my belief that we’re bad stewards of the earth. As the reigning species we’ve done terrible things to the planet and to each other. That’s thrown in too with a humorous approach, but it’s still got a real point to it though.”

Welcome To The General Hospital Nurses Ball 2014: The Red Carpet, The Performances,The Drama!