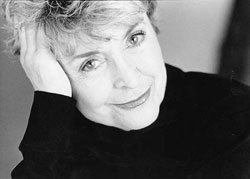 Well, we knew somebody would be smart enough to get in touch with As the World Turns first leading heroine, Rosemary Prinz and the New York Post did over the weekend.  Prinz played Penny Baker Hughes Baker Wade Maguire.  Try that one on for size, Erica Kane!   However, Prinz details in this feature that many times throughout her soap stay on As the World Turns she butted heads with creator, Irna Phillips.

PRINZ ON PHILLIPS AND ATWT:  “Irna Phillips, the head writer, used to get mad at me, because in my time off I would go do plays, and not be Penny, and I was supposed to be Penny all the time. Penny would never drink or smoke, and of course I did both. It was in the contract — we weren’t supposed to do anything. If there was a publicity shot, they’d take the glass and the cigarette away, and the next day I would get this fl ack [saying], “You ungrateful wretch! You’re Penny, you’re supposed to be the grieving widow.” And I said, “No, no, you don’t understand. I’m not Penny.”

Irna would have a fit. She’d write something for the show, she’d have me say to my then husband, “You know, Gloria and I are very much alike.” And he’d say, “Now Penny, Gloria is beautiful and talented.” Things like that.  I broke all the rules, and then I would say, “Just fire me! Go ahead! I don’t want to be on this show anyway!” Every time they’d come up with something, I’d [refer to my contract’s end and just] say, “’68!” And they would know exactly what that meant. I was looking seriously forward to that.

When Kennedy died, there was four days of complete television coverage, Friday to Monday, and it was just — the nation was in this deep mourning. It was just 9/11, for four days. And when we got back on Tuesday, I said, “We can’t just have a scene without mentioning what we’ve all been through.”

They said, “Oh, no, we can’t do that. Just do the script.” So I started a scene with Grandpa, and of course it’s live, what are they going to do? So I said, “Grandpa, here we are talking about Tommy, and after all the country’s been through for the last four days.” I got in what I had to say. And then they all rushed down from the control room and I said, “Oh God, I just said the first thing that came into my head!”

Irna got even with me in the end. I couldn’t wait for my contract to be over — I paid the analyst, I got un-crazy and I didn’t want to do the show anymore. And so Irna had me steal my brother’s child and go off to England.  So this heroine is suddenly doing this terrible thing.”

Make sure to read this intriguing and interesting article for any ATWT historian or fan of the soap genre!

Bianca's Coming Out named Top Storyline of the Decade!

As My Stomach Turns- Thoughts on ATWT's demise!