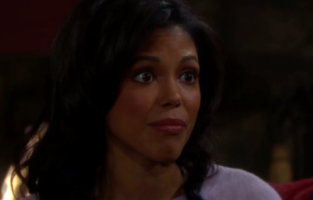 This week on The Bold and the Beautiful all the groundwork has been laid for the truth to come to light to everyone in Maya Avant’s (Karla Mosley) life!

The Spencer and the Forrester clans and all the people that Maya works with have found out one way or the other that she was born a man, “Myron”.  But there is one key person in Maya’s life yet to know, and it looks like this Friday on the May 15th episode of the CBS daytime drama series, it will finally be revealed to him.

The set-up:  Maya has been on a trip alone with Rick Forrester (Jacob Young) to the Forrester cabin in Big Bear.  Rick is asking Maya to marry him, but Maya decides it’s time to be honest and disclose her truth to the man she hopes will love her unconditionally.

PEOPLE.com has the exclusive this afternoon of an interview with Karla Mosley on filming the pivotal scene where Maya is set to confess all to Rick, plus a sneak peek clip of how it will happen.   She revealed “This is the scene, I think, we’ve all been preparing for – both as actors and as an audience. What will Rick’s reaction be?  So, as a performer, I worked on two levels. First, I went back to the words of people who have been through it. Deciding when to disclose during dating and how to do it in a way that is both safe and responsible for all parties is a common question for transgender people.”   Mosley went on to say: “Ultimately Maya trusts Rick, she loves him enough to risk everything – including letting down some of the walls she’s built up to protect herself – in order to be  with him in a healthy way.”

Watch the sneak peek from tomorrow’s episode as Maya begins to tell Rick that she is transgender.  Then, let us know, what do you think Rick’s reaction will ultimately be to the news?   What have you thought of Karla Mosley’s performance throughout this storyline thus far?  Comment below.

GH LIVE Begins Tomorrow! Watch Behind The Scenes From The Set On Periscope!

Karla has been mesmorizing thruout this story. Rick will be stunned, rage, assimilate and realize he still loves her. Why else do this story? To show that transgenders lose???

I think Rick already knows. If he does, it will mess up Bills plan.

I’m just super glad that it looks like they are giving Maya a chance to tell Rick instead of Rick finding out some other way– unless the conversation gets interrupted which is known to happen a time or two on soaps.

I feel he will be in shock like everyone else but he will eventually accept her for what she is but I don’t know if their relationship will be the same as if she would have told him before , as for top model she will lose that position but being transgender will boost the Foresters business so Maya will still be an asset.

Great speech for others to use maybe as a guideline for their own way to tell others if transgendered and keeping it secret. It takes such courage to even decide to make the change of gender and there is often much sense of loss especially if family and friends are lost.

I hope this storyline includes Rick will be willing to learn more and go to see her doctor with her to be more educated in order to continue to love her as the woman she is today.

This an opportunity for Rick to be a man and accept Maya and continue to love her. This is going to be big when it is public but it could be made to be a great s/l of acceptance for the transgender community. Let there be shock but there be more support for Maya.

How does loving a man make Rick a man?

I don’t think he will be surprised at all. By now he HAS TO KNOW there’s a difference between the real VAJAYJAY and one made from a …well you know…nobody is that hot in the britches for so long that they just don’t notice LOL…I’m surprised he hasn’t found the “toys” needed to keep it in working order..while I like the story..there’s some missing layers to this onion..and Maya’s…well …you know…

Thank you … The audio spoiler did the trick… B&B will hold off till Monday to revel Rick’s reaction to Maya having been Myron… fingers crossed it’ll get a good result… I think not after all it is a soap opera… truth be told a good number of gay, transgendered upon revel suffer from being kick out of their parents house, ostracized, presented with physical altercations, to beatings, and death.. still in 2015… dang i’m hoping the writers will opt out and take the high road… well, it is LA…. So there’s hope.

I wanted Rick to find out from it being blasted by Spencer Publications. That’s good soap opera!

One thing is, Rick has been going on and on about how honest Maya is and here she’s been keeping the mother of all secrets!

I love this storyline. Everyone, especially Karla Mosely, have been rocking their scenes. It’s been a great umbrella storyline that has involved almost all the key B&B players. Really great soap! Can’t wait for the reveal & fallout.

I think it’s about time. If Rick loves her like he says he should be ok with it. However I think he will be upset that she took so long to tell him. If he finds out about all the people that knew before him I think he will be very upset.
Carla has did a great job acting as Maya/Myron. I really did not like her before and I almost feel sorry for her now.

Well if I had been sitting there as Rick it sounded like Myra was saying I was raised a tomboy. Rick’s past anger issues for anybody to even remotely think the character will say Oh that’s fine and go on about his business is a big lie. Sorry I have no sympathy for Myron because she and Rick both have bullied everybody for months poor Ally at least we kept Bill Spencer true to character.

Karla is doing such an amazing job…I think Rick will accept her if it doesn’t get out by Bill Spencer….. he might be in shock but if he truly loves her he’ll accept her for who she is….I hope Spencer Publications doesn’t print it….

Remember that Rick shot a gun at Ridge & Caroline for just kissing & covering it up. I think Rick is going to lose his grip on reality and be greatly offended for hiding such a big secret. Later on Rick may wake up to his part in it all, but not right away…it’s going to be really big drama!

When a character is surround by lying, cheating, skanky women ; Brooke, Hope, Amber, Carolyn it could make a man very defensive. I believe, for the first time, Rick is experiencing unconditional true love. If Rick really wanted to kill Ridge & Carolyn, they would be dead. When your own brother stabs you in the back ,as well, pushed Rick over the edge. I can see Maya and Rick’s love for each other bring out a kind and compassionate Rick. The Rick who has been locked inside due to so much heartache.

Oh my god seriously, who cares whether she is male or female. Bottom line she has been acting like a prize bitch and Rick has been a total jerk! Just because she is transgender, it doesn’t excuse the way she has been treating everyone….like dirt