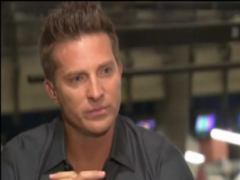 One of the all-time most popular actors and characters ever to grace General Hospital, Steve Burton (Jason Morgan) spoke to ABC News about his upcoming departure from the 49-year-old soap opera after being with the show for 21 years.

During the video interview, Burton talks about his decision to move his family to their new home in Nashville.   The interview also points out that it is confirmed that Burton will be seen on air into November, although he last tapes his final GH episode at the end of this month.

The most poignant moment came at the end of the interview piece when Burton tried to share his emotions and thoughts on what it was going to be like not driving to the ABC  lot every day and seeing all the beloved cast and crew that he has been with for so many years and that have been a major part of his life.  Choking back tears, Steve admitted, “It’ll be hard.”

Moving on to other projects, including the one mentioned previously with James Franco, wanting to produce and direct, and continuing on with Port Chuck – his band with fellow castmates, Brandon Barash, Scott Reeves and Bradford Anderson were mentioned as all a part of Burton’s plan post-GH, as well as the unknown to see where his career can go next.

After the jump, watch Steve’s comments, and if you were like us, you may need a hankie, when he realizes time is getting close for the Daytime Emmy winner to film his final moments as Jason.

GH's Maurice Benard to Star In New Film, "The Ghost And The Whale"!

I had the opportunity to meet him quite a few times & to know this has been his dream for a LONG time. I wish him nothing but the best.he is a sweetheart of a guy and you can’t want anything but the best for him..it will be sad & GH will be different but don’t we all want our dreams to come true& to try new things??

OMG steve burton gonna be miss GH wont be the same without Jason Morgan. you must follow your dream goo luck God blessyou and your family. Thanks for the memory. Adieu .

Wow I’m gonna miss Jason. Can still remember the classic episodes with Carly Sonny AJ Brenda Jagger Karen Stone and Robin. Wow so long ago. I will always have my memories. I wish Steve the best and hope he comes back for guest appearances

Incredibly sad for GH, but I wish him well. If he’s going to do anything else, now is the time. I always remember Nathan Fillion talking about the advice that Bob Woods gave him. He told Nathan that soap work was like “golden handcuffs”, and that he’d have to leave to be able to really try anything.

I wish Steve nothing but the best in his future projects, however, the exit of Jason Morgan is one that is long over-due, especially given the horrific treatment of JaSam as a supercouple on “General Hospital”.

Thank you Michael! Please do a video interview with Steve for all of us!!! He is my fave and I am sad to hear he’s leaving… even though I am happy for him and his family! You do such a great job with your interviews and we know you like him… so you could do a great interview!!! Oh you could also have him on your next podcast!

So Sad , but I wish Steve Burton the best life has to offer. Whatever he does I will be there to support him. To the TV and Movie world take notice of this incredible actor and treat our Jason with all the respect he deserves. Thank you Steve for entertaining us these last 21 years.

I wish Steve the best in all his new endeavors. He’s provided a lot of entertainment for us, for many years.

Look forward to seeing him elsewhere… but not with James Franco though. 😉

Still not buying that Steve did not want to be around for the 50th Anniv. storylines coming up. The reason he isn’t because FV and Steve could not work out a schedule for him whlle living in TN full time. If Phelps and Frons were still here Steve would be staying with the show……no question. Phelps and Frons would have worked out something for Steve to get him to stay. They adored SB. The current regime? Not so much. JMO.

I highly doubt the outcome would be different if Phelps and Fronzilla were still there.

I will miss him so much! Jason and Sam are the best! I’ve loved Steve since I first saw him on Days of Our Lives and loved him on Out of This World. I’m sure I’ll find him somewhere again! Maybe he’ll be back on GH or DOOL or on to YR? I’m crossing my fingers. He’s so talented and not to hard on the eyes!

Sad to see him go, but I completely understand. Hopefully TPTB will find a way to have him return for the 50th anniversary…him and Robin! 🙂

Awww…he really did get choked up….

Steve was signing autograph’s in Sear’s when me and my daughter went to the mall to meet him. He was still a Quartermaine back then and not yet dating Keesha. We were the only two there to meet him. He was really nice. After his accident and he became a hitman for Sonny he got so popular so fast you could no longer just walk up to him for a autograph because of the tremendous crowd’s. He has come a long way with GH. I wish he wasn’t leaving right now with the show already in such a fight to… Read more »

I will miss watching steve he is amazing not to mention hot. I cried my eyes out when I seen he was leaving. I will see port chuck and pay the maximum just to see him up close. Hope he comes back to gh it wont be the same without him.

OMG GH will never be the same without Jason Morgan, Steve Burton do what you need to do follow your dream , be happy . I wish you and your family all the best. God bless we love you always . Adieu thanks for the memories.

I have been watching GF for about 40 years, as long as I have been in this country. Steve Burton is a great actor and I have enjoyed watching him for over 20 years and wish him well. I miss seeing him in the story but sometimes you have to take a leap and try something you have wanted to try for a long time. I wish him and his family well and will tune into the rival show once in awhile to see him.

Steve (Jason) Was The Main Reason I Watched GH!!! As Steve Said…We The Fans Don’t Know What Goes On Behind Closed Doors!!! GH What Were You Thinking???