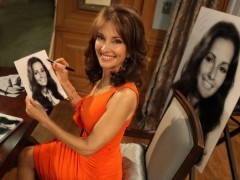 Photos include pics of Erica Kane, Tad Martin, Leo Du Pres, Maria and Edmund, Phoebe Wallingford, Angie and Jess and many others. For those die hard Erica Kane fans, Susan Lucci has also signed a limited number of photos of Erica Kane from her first month playing the legendary character from 1970. These photos, also available for purchase, will come with a certificate of authenticity.

On-Air On-Soaps was on the set of AMC last week when Susan Lucci made the announcement to the press on this new way to honor the shows 40th celebration.  When asked when she looks at all the photos of her and the cast, is there a moment in time that stands out for her, Lucci replied  “I did not expect to be so touched by these photos. It is wonderful opportunity to think about those times and the fun places we had gone.  There is one photo representing every year we have been on the air. Many of the AMC fans have life memories and personal memories of the show attached with these.  When I see these images, I recall so many scenes with Frances Heflin (Mona) and Ruth Warrick (Phoebe) and all the scenes we had together. It was a different time back then. We shot each episode it as if it was a play from beginning to end.  I don’t know how we did, but we did. But it was a great bonding experience to be humiliated in front of each other that way. (Laughs) But, it was such a great learning experience for me.  When I first started on AMC, I would get advice on men from Ruth Warrick on the set!”

Check out our special photo gallery of some of the images you can now purchase for your very own and have a piece of All My Children history after the jump!

Later, when asked how she felt looking back at her original headshot from the series, that is part of the archive series available for fans, Lucci  responded, “I personally had very little experience, so to come and do some headshots, I did not know enough to be afraid.  I just went ahead. I was happy with the outcome and my hair is naturally wavy.  It was a summer day when they did this shoot, and so I was very happy how this came out!” (Laughs)

James Franco on why "Franco" is turned-on by GH's Jason Morgan!

Michael, love all those snapshots of AMC cast members from the originals and the latest. It really takes me back to earlier time in my life with those memories. Susan Lucci has really lasted for longer than most stars, but she is a true star. Plus, she has maintained her beauty. The original photo of her is truly beautiful and anyone getting one of the signed ones will be really fortunate. And on it goes……..