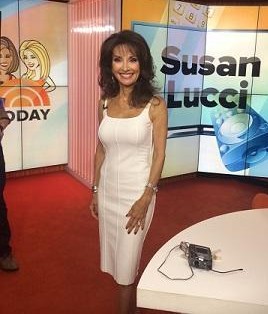 Investigation Discovery continues to channel their inner-soap by utilizing some very familiar names in the soap genre, chief among them, of course, is Susan Lucci who returns as host of another season of Deadly Affairs which kicks-off this Saturday August 16th at 10PM ET on the cable channel.

La Lucci appeared yesterday on a segment of The Today Show with Kathie Lee Gifford and Hoda Kotb promoting Deadly Affairs new season and the “character” she plays in the host wraps and vignettes.  Susan also discussed the fate of her Devious Maids character Genevieve!  Later in the segment, the gals played “Spin the Bottle” with Susan which incorporated some of her Erica Kane and soap opera history!

As part of their the marketing blitz this week, Investigation Discovery also put out a press release announcing that “After a successful debut last year, Investigation Discovery bringing back its ID Daytime programming block featuring what the network calls “real-life soaps.” Beginning Monday, August 25 from 1-4 p.m. daily, soap stars from past and present host encores of ID’s most scandalous series, such as Wives with Knives, My Dirty Little Secret, Scorned: Love Kills and Evil Twins. Beloved pairs are reunited on screen each week to provide insight into these cautionary tales, including: General Hospital’s Lynn Herring and Kin Shriner; Days of our Lives’ Mary Beth Evans and Wally Kurth; bad boys Lamon Archey from The Young and the Restless and Darnell Williams from All My Children; and telenovela actress Katie Barberi, Dona Barbara.

The daytime stunt airs in conjunction with ID’s evening primetime return of a new season of Deadly Affairs with Susan Lucci, featuring all-new stories of deadly dalliances on Saturday, August 16 at 10 p.m. ET on Investigation Discovery.

“Soap fans are a voracious audience, hungry for emotionally riveting content and devoted to the characters they’ve grown to love – or, hate,” said Henry Schleiff, Group President of Investigation Discovery, Destination America, American Heroes Channel and Discovery Fit & Health. “As the #5 network for women in daytime*, soap opera fans know that they can always find their ‘stories’ on Investigation Discovery – the real life tales of passion – and, on occasion, perhaps, a little poison.”

Now below watch Susan Lucci on TODAY, and then share your thoughts on her segment, Deadly Affairs, and ID’s upcoming “Real-Life Soaps” programming block?  Will you be tuning-in?  Like the concept?

Visit NBCNews.com for breaking news, world news, and news about the economy

NATAS Formally Announces Chuck Dages As New Chairman of the Board!