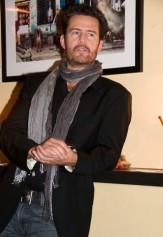 For a nice fun silly break from all the sorrow and frustration over OLTL and AMC’s cancellations over the past week, we found this little ditty from none other than Llanview resident, Ted King (Tomas) in this week’s issue of Soap Opera Weekly that One Life to Live fans will get a kick-out of.  It seems during a recent fan club event, King shared his David Letterman-esque countdown of the Top Ten Reasons You Should Be Watching OLTL! So without further adieu here is the countdown below starting with number ten!

10) If someone gets slapped…it’s real.

8)  Bullying will not be tolerated.

7) It’s the only show where the guys take off their shirts more than the ladies.

5) The Southern Accents are real.

4) The cops get convictions and put people in jail.

1) (It’s) the only soap where you might see a guy paint, use karate, speak French, Spanish  and English, and play the piano in the same scene.

Michael Fairman on state of soaps, cancellations, & what fans can do!

Guys w/shirts off is not one of my top reasons to watch, even in top 100 reasons (eww). But OLTL is the best written soap right now, and the *only* one in New York.

He’s a smart, funny, and handsome man. He’s a pleasure to watch onscreen or in person. If ABCD is smart, they will not stand in the way of someone else saving this well written and produced show. I just read a quote in the most recent Hollywood Reporter by David Madden, Fox Television Studios President.

“..and there’s nothing wrong wrong with reality shows – we make a bunch of them. But frequently they have less appeal to advertisers and are not as appealing to the affluent viewers that advertisers are most interested in.”

Fun list! I remember at Jessica Leccia’s fan luncheon when she was talking about doing her scene with John Wesley Shipp where Inez slaps Eddie Ford. She mentioned that he wanted her to actually slap him, so that it was actually a real connect, not just faked to ‘look’ real.

#OLTL best soap on the air.

Thanks MICHAEL I NEEDED THIS.LOL

As a hugh OLTL fan this made me laugh out load and we have not had too much to laugh about lately. Thanks so much.

WAY TO GO !!!LOVE IT (I LIVE IN FLORIDA) WE DON’T LIE ABOUT ALLIGATORS NOR BUGS ! OLTL THANK YOU FOR SHOWING ME HOW TO DEAL WITH BULLING, I HAVE A 12 YEAR OLD GRANDDAUGHTER.WE CAN WATCH AND PRETEND! THANK YOU GUYS BEEN THERE FROM DAY ONE(NO AGE SPOKEN HERE)

OLTL has the best writing and stories of all three- The reason OLTL is doing so well is because Frons left it alone thinking it was going to tank.. But it sored the moment he got his nasty hands away from it and focused on amc with gh. Both of which have crappy writing.. Ted King as they say in the street-YOU are all that and a bag of chips… Sexy hot smart. OLTL is lucky to have you .. I hope Nbc does pick up OLTL and keep current writers.. because I have a feeling OLTL is really going… Read more »

omg!!! this is so true!!
and i might add that ted king is so damn sexy and an awesome actor – i loved him on gh and so glad he is on oltl

These are all good reasons, but no one seems to mention the overlooked (especially by the Emmys) but exceptional Florencia Lozano.

Oh, Ted, I heart you. i’ve also been watching soaps for 30 years and have never heard oh this Fairman guy.