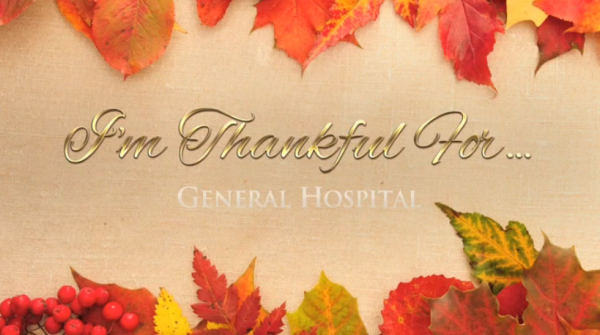 In a very warm and fuzzy video ditty from the folks over at ABC.com and General Hospital, members of the cast of the soap share what they are most thankful for this holiday season as Thanksgiving is only over a week away!  How times flies!

At the conclusion of the video, it’s Lisa LoCicero (Olivia) who has the last word!  And has been rumored and noticed by fans of the long-running series, Lisa is pregnant with her second child and she confirms it in the video by revealing standing sidewise :  “This year, I am thankful for health and abundance…and number two on the way!”

Will Lisa’s pregnancy be written into the story of GH?  It would seem not after all the baby trouble going down in Port Charles right now.  But, there has been no official word on this.

Watch the “I’m Thankful For  …” video after the jump.  Then let us know, what was your favorite part?  And what are you most thankful for this season as a GH viewer?

Peter Bergman Is Saluted On His 25th Anniversary With Y&R: The Speeches, Co-Stars Sentiments & Our Chat With Him!

Right now, I am most thankful for Michael Quartermaine! Finally!

Plus Maxie and Nathan, love them together.

I could not agree more about Michael Quartermaine! Bring on the Quartermaine’s and their annual Thanksgiving episode please!

I am thankful for GH more than I can say.

Congrats to Lisa Locicero! So happy for her. Lovely vid! Nice to see a bunch of my faves.

Lisa is so gorgeous…petite , with a great body…I wish that her pregnancy be a breeze and her baby healthy and safe.
Yes, TPTB should incorporate the pregnancy into a storyline, somehow. It is about time that a character go through a normal pregnancy without baby snatching, car accidents or deaths on GH, or any soap.

I really wish us Canadians could see these videos from the network. It’s annoying. We are as much fans as Americans.

I am thankful fhat GH is still on the air.

Congrats to Lisa and her family! I’m grateful that Sonny is not to get away with another murder especially one that hits so close to home. He can always do scenes from Pentonville and stay on the show since Maurice Benard is a great actor.