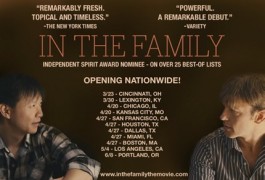 Those clamoring for a return of Trevor St. John (Victor Jr.  One Life to Live) to their television screens will get to see the talented and dynamic star when he appears on the Sunday May 13th episode of Jennifer Love Hewitt’s new Lifetime series, The Client List!According to Soap Opera Digest,  “Trevor will play Nathan, a client of Hewitt’s Riley.”

In other major news, Trevor’s latest film, In The Family, which On-Air On-Soaps spoke to the actor about an in-depth interview a few months back, is finally getting nationwide distribution!  Make sure to check out the movie poster and cities by logging onto inthefamilythemovie.com for the premiere dates in the following cities:  Cincinnati, Lexington, San Francisco, Chicago, Kansas City, Houston, Dallas, Miami, Boston, Los Angeles and Portland.

And, as for if St. John will land at General Hospital in the near future, due to the Todd Manning story with Roger Howarth beginning to play out on-screen, that remains to be seen!  But, his legions of fans are hoping that a return is imminent!

Why do people kept thinking he is going to comeback to daytime after he just left it? He wanted to move on and do something different and that’s what he is doing. His fans should be happy for him and leave it at that.

He came for the finale when he was supposedly done and wasn’t coming back like he told everyone. He even said then he’s open to daytime (and afterwards) depending on the obligation.and would consider a move to GH. They wouldn’t have done the Todd story the way it is on GH. They could’ve easily said he was found alive and Todd was cleared. But no, RC/FV must have an agreement for a short stint (similar to recent OLTL characters got) otherwise there’s no point. It’s clearly that simple.

General Hospital should be careful to not bring too many OLTL characters over. Many hardcore GH fans have started to defected from the show because they don’t like that they are OLTL characters on the show.

I am very happy for him. I think its awesome when daytime players turn up on primetime.
No, he isn’t coming back to GH. NOT at all!
Congrats Trevor!

I’m so happy for Trevor! He was really treated poorly after Roger decided to return to OLTL after so many years! He’s a great actor and I hope we see more of him!

WAIT a minute. There are 2 sides here. NOBODY fired or suggested Trevor leave. He wanted more money than they could give him. Obviously Roger was happy with the pay, and jumped at the chance. In all honesy, sounds like Trevor is doing better for himself so obviously his decision was the right one for him.

Is that what TSJ told you? That he wanted more money? What do you know about his finances? TSJ said he wanted to move on after 8 years,( I don’t blame him at all, TPTB at ABC Daytime are downright trifling) he said nothing about money, please do not put words in other people’s mouths. As for ABC Daytime, a blind person can see that they play favorites. They have a track record for this type of behavior. The “REAL Todd’ storyline is just a repeat of the “REAL Greenlee” and the “REAL Lucky” storyline. I am a Jonathan Jackson… Read more »

So yea, that is what TSJ told me!!!!! 🙂
Robin Strasser who is a legend, got a little too mouth about her thoughts on the show and abc was not happy about it. She had planned to leave for minor surgery and they chose not to take her back. When you ‘bad mouth’ the employer, chances are you will lose your job. Why do you think Alexis has had no storyline for years? She is twitter happy.

@ Debi If you are his friend, then why would you be spreading his personal information on the internet? TSJ appears to be a private person and that does not seem to be the kind of information he would share with just anyone. Unless TSJ says otherwise, I’m going to go along with what he has said in his interviews. As for Robin Strasser, she is a bit outspoken but I still feel that ABC Daytime was being petty for not having her in the final episode. She has been a part of the show for a long time, it… Read more »

TnT Jealousy is not so becoming. Trevor and I aren’t friends, we have mutual friends. Re-read my post.:)
Also Trevor stated in an interview I believe it was TVGuide that he would not be returning for an ending scene on OLTL. Yet he did.
So you chose to believe what you do, and I will chose who & what I believe.

I am not jealous of you, so I have no idea what you are referring to. TSJ did not want to ruin the finale, since his return was supposed to be a surprise, I would not equate that with information regarding his contract negotiations. You can believe what you want, but since it is TSJ’s career, I will give him the final authority on it.

SO happy for him! Cannot wait to see In the Family and his ep of TCL (Knowing what the show is about, I hope we get to see some shirtless TSJ 😉 lol), but I am still hoping and wishing for him to pop up on GH. Even if it is just for a day so Victor & Tea can be reunited, as well as making Todd a permanent resident in Port Charles believable. 🙂

I also wanted to say thank you Michael Fairman, for keeping us updated on TSJ info. I love your website!

Oh, my lord, TnT 2.0 Forever….. Wow! I am so proud to see how U defended the “other side” as I do. You weren’t nasty, U just told it like it was. Yes, ABC is notorious for playing favorites, and U stated it beautifully, ” the problem with ABC Daytime, they put their egos before the needs of their viewers. ” I also see how U spoke on things I have been speaking on since December, since I signed on: Favorites, the disrespect of Trevor St. John, the disRespect of Dorian not staying until the final AND not EVEN being… Read more »

TnT: I loved these points you made in your first paragraph: ” ABC Daytime are downright trifling) he said nothing about money, please do not put words in other people’s mouths. As for ABC Daytime, a blind person can see that they play favorites. They have a track record for this type of behavior. I am not a Greg Vaughn fan but I was still upset because I can see when people are being disrespected and I don’t like it at all. But disrespecting actors is what ABC Daytime does best. I have no doubt they did the same to… Read more »

Wow! Thank you so much! I absolutely agree with you that TSJ is the real Todd and how he did more to shape the character than RH ever did. It was the many layers that TSJ brought to the character that made me connect to Todd in a way I never had before.

This is no personal disrespect OR finger pointing to Debi or her position. This is my opinion/ over-all accessment of daily banter, issues that is discussed on this site.

I agree! Trevor was the real Todd! He had the right next of good & evil. Roger’s Todd was all evil.

Trevor St. John is/was the best thing that ever happened to OLT. He breathe life into the role of Todd Manning . I cannot believe the talented staff for GH has not figured a way to write this very talented actor into script…He will rock Port Charles!!!!! Better yet come up with a new soap opera(thats simple) either way put this guy back to work on daytime television.

I don’t know how a talented actor like Trevor St. John could stand playing someone as vile, corrupted, low, and ill-fated as the one he played on One Life To Live. Personally, I’m glad that Trevor left the series. The character he played was nothing more than a sociopathic jerk. Someone who ruined lives, got away with way too much, and poisoned and polluted Llanview with all of his illegal BS. In some ways, the hatred and resentment between his ill-fated character and that of the heroic John McBain(played wonderfully by Michael Easton)was similar to the characters played brilliantly by… Read more »