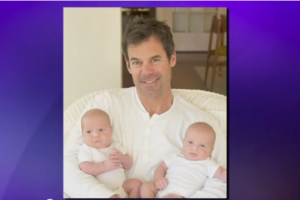 On yesterday’s episode of Hallmark Channel’s  MARIE, host Marie Osmond welcomed One Life to Live favorite Tuc Watkins (David Vickers) to the show to promote the premiere of the returns of all-new episode of the beloved soap opera!

During Tuc’s two segments, Marie posed questions many fans have asked in regards to how the new One Life will be different than than the ABC version, and the how the show no longer has to deal with the standards and practices barrier of the network in their new online platform.  Tuc filled the audience at home and in the audience in.

Additionally, Tuc became a proud new papa to two adorable twin babies born four months ago …  Curtis and Catchen Watkins! Tuc tells Marie how he came to choose the two names for his new little bundles of joy, and how he prepared for their arrival being a gay single dad.

Later Tuc is joined by his delightful sister Courtney Watkins who Tuc says lives 15 minutes away from him, but often calls with baby emergencies and asked her to show up in five minutes! Of course the ever funny Tuc, was being his witty self!  Courtney who is a host on TV’s Disney Family’s The Possibility Show. Tuc’s talented sis,  also runs Creative Adventures which is an enrichment program for grade school children, which was also discussed during the segment.

Watch Tuc’s segments in the first 15 minutes of yesterday’s Marie and let us know what you think of Tuc’s adorable new kids!  Congratulations Tuc from On-Air On-Soaps!

What Did You Think Of Today's Second Episode Of All My Children?

He is such a well spoken, intelligent, talented and wildly hilarious man. I wish him and his new family nothing but good health and happiness. So sweet!

Love him! Best wishes to him and his new family!

I love Tuc even more than ever. Willy Wonka and the Chocolate Factory is what I would consider to be the greatest movie of all times. We are like bestie soul mates!!

the original one – w/Gene wilder.

I cry everytime…. for me and Charlie.

Cheer up Charlie – and it gets fantastical.

I love Tuc. The babies are so cute. I wish him and his new family nothing but happiness, health and peace.

That is so great, that he came out, and that he’s raising those two beautiful twins!

But if he needs help I am here for him! 😉

Tell Me Something Good

He plays a little finicky for Dorian’s husband, moreso OVER THE TOP about things, BUT…… his comedic timing makes it BELIEVABLE!

No one else like Tuc. Great to have him and OLTL back and ckngrats on him becoming a dad.

What a fun interview!!! I am now an even bigger Tuc Watkins fan… what a great guy and the twins are adorable! They are very lucky to have such a fun Dad! How brave and great is it for him to have done this on his own. Why someone hasn’t had him on a prime time comedy series is beyond me. I would hate to lose him on OLTL but he’s just to perfect not to have a show… maybe one about a single gay guy with kids?

I liked him even more after your hangout with him too Michael… he was great on that and so good with the fans!

saw his interview with MF –

congrats on your family….

A threshold from which we’re uniting with.

READ MORE
OLTL's Erika Slezak Message To Her Fans During COVID-19: "I Hope Everyone is Well and That We Come Out of This In One Piece"
Continue Reading