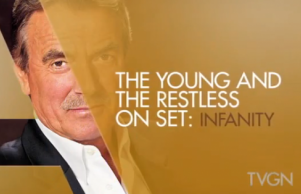 It’s certainly a countdown to Monday for fans of The Young and the Restless and the Sony soap opera, which debuts this Monday in its new cable home TVGN for same-day and date repeats of the CBS episodes airing at night starting at 7PMEST/PST!

Kristoff St. John (Neil Winters) hosts the special and anchors the action as we get a glimpse into life behind the scenes of the number one!  Watch after the jump as Sharon Case, Joshua Morrow, Eric Braeden, Peter Bergman, Michelle Stafford, Christian LeBlanc, Tracey E. Bregman, Greg Rikaart, Elizabeth Hendrickson, Christel Khailil, Steve Burton, Melissa Claire Egan, Michael Muhney and more, discuss love scenes, working with each other, and much more!

In addition, in an emotional moment, Jess Walton talks about how it will be without her long-time co-star Jeanne Cooper!  Cooper passed away in May, and Walton recalls what it was like working with the legendary icon for so long.

Take a look at the full episode of The Young and the Restless On Set: Infanity after the jump! If you haven’t seen it on air, now is your chance! Let us know what your favorite moment in the special was?

Monday's B&B: Taylor Blows The Whistle On Bill and Brooke's Ugly Secret! How Will Katie React?

Billy Miller and Amelia Heinle are absolutely as adorable offscreen as they are onscreen. No wonder their pairing has been such a success. Too cute! Really enjoyed the whole special, very good idea and happy for the show and TV Guide Network!

The Y&R having re-runs on TVGN, is no big deal..

I do not see any excitement in that happening, I just don’t .. lol

But ill still watch and support them.

It’s not reruns. It will be an opportunity to see the same day’s episode, that night. Very convenient for many fans. I’m sure there will eventually be other good stuff to see on their channel.

Won’t be watching. I have not liked what JFP has done to Y&R or the Steve Burton Avery hour.

No longer care what network picks them up or cancels them, JFP killed the spirit of Y&R with her dissing of superb actors in favor of her one note dull friends and newbies.

I enjoyed this segment very much as the Y&R is my favorite soap. I like the chemistry between Billy and Victoria and also Michael, Lauren and Fen. I am missing however seeing Nikki and Victor as they are the backbone of the show. I hope we get to see a battle between Victor and Adam soon. I love it when Eric Braeden explodes with anger although I worry he will have a stroke. Such a wonderful actor! As for TVGN, we will see how creative the network gets. Good luck TVGN.