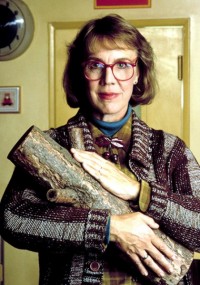 On Monday, there was heartbreaking news for fans of the iconic Twin Peaks. The ABC soap that aired for only two seasons on ABC in 1990 and 1991, and is currently in production for its revival to air on Showtime, lost one of its most beloved cast members.

Catherine Coulson, who played Margaret Lanterman, the clairvoyant Log Lady, died at age 71 of cancer.  Coulson who also worked as a camera assistant throughout her professional career had worked with, and known Twin Peaks creator David Lynch for years.

In a touching statement on her passing Lynch related: “Today I lost one of my dearest friends, Catherine Coulson. Catherine was solid gold. She was always there for her friends — she was filled with love for all people — for her family — for her work. She was a tireless worker. She had a great sense of humor — she loved to laugh and make people laugh. She was a spiritual person — a longtime (transcendental meditation) meditator. She was the Log Lady.”

Coulson had previously described her Twin Peaks character as the “only normal person on the show,” though did admit that the Log Lady had experienced “some trauma and bonded with this Ponderosa pine.”

Last December, Coulson appeared at a Twin Peaks event in Philadelphia.  She revealed that she had received a call from David Lynch about reprising her role as Log Lady for the upcoming revival of the series.  While she revealed to the audience that Lynch did not offer up much for the plans for the Log Lady, and how she had developed in 25 years ago, she would only say, “He suggested I talk about sustainable forestry.”

Share your thoughts on the passing of Catherine Coulson in the comment section below.  But first, watch the character introduction of Coulson speaking as Log Lady, and a scene from the original Twin Peaks featuring: Kyle MacLachlan, Michael Ontkean, and Coulson.

DAYS 50 Super Couples: Who Is Your All-Time Favorite Salem Duo?

I saw this entry had no comments, so although I don’t exactly remember her in Twin Peaks, I do know she was somebody’s loved one, so my condolences to her family and friends on her passing.