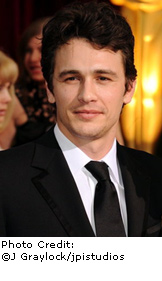 Motion picture film actor, James Franco is coming to General Hospital for a two month run, this according to tweets from "GH’s" Steve Burton last night, and earlier in the week from former "GH" super star, Vanessa Marcil, and "The Biggest Loser’s" Jillian Michaels! Is this all a hoax? While initially some thought so, it seems this is true, and that Franco’s Port Charles character will mix it up on-air with Jason and Sam.

The recurring role will begin Nov. 20 — to coincide with November sweeps — and will last about two months. "GH" Executive producer Jill Farren Phelps says, "It’s an honor that an actor of Franco’s caliber would choose to spend some of his valuable time in Port Charles." Franco, who is currently in Ireland, is scheduled to tape several episodes in three days—October 30, November 6 and November 13—and they will air over the course of two months.

ABC rep, Jori Petersen told EW.com today, "The only thing I can tell you about his character right now is he is playing a mysterious person who comes to Port Charles who will be Jason Morgan’s worst nightmare,” Petersen said. Franco and Steve Burton, who plays GH’s Jason Morgan, share the same manager. The rep continued to say to TV Guide, “He loves to explore the different types of acting that are available and had never done soaps and was really interested in the amount of work soap actors do—he wanted to try it out,’ noting that Franco contacted GH directly!

Stay tuned for more on Franco’s upcoming "GH" stint in the days ahead!

Volunteer with the Soap Nation and the stars of "GH", "OLTL" and "AMC"!