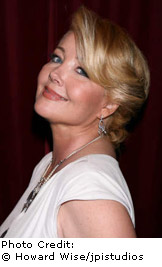 In a new exclusive interview out today, TV Guide Magazine’s Michael Logan has confirmed that Melody Thomas Scott (Nikki Newman) has reached an agreement with the top sudser and renewed her contract to stay on as Nikki.  Scott, was asked by “Y&R” to take a hefty pay cut or switch to recurring status. She objected to both.  So, since contract negotiations had broken down, the writers scripted a very dramatic exit for Nikki, just in case a deal could not be reached.  By the time both sides came to an agreement the shows were already in process dictating Nikki’s exit and were taped. They will air in early August. Scott, will return to the show after a vacation.

Here are a few excerpts of her conversaton with Logan. In reference to discussing her new deal, Melody stated, “I’ve always had a non-disclosure clause in my contract, so no. And now we’ve all been given the most strict confidentiality memo I’ve ever seen at Y&R. I guess in these days of Twitter apparently people at our show are just typing away when they’re not supposed to be.   But I will tell you this: The way they write me off is shocking, but ambiguous. ”

In reference to how long the writers handled the delicate situation, Melody made this statement;  “I really have to hand it to the writers. Nobody knew how this [contract situation] was going to end so they very cleverly figured out a way to get me off the show. I never say stuff like this, but I have been so knocked out, so impressed with the writing of the episodes that air the first week of August. Please put this in your article: That week is not to be missed. It’s an amazing ride—grueling but really satisfying—and the writers did terrific work. Not just with my story but the whole show that week. You cannot miss it.

Thank goodness Melody is staying put, and we can’t wait to see how this all plays out on air!

Happy 4th – Save The Best Bauer Barbecue For Last