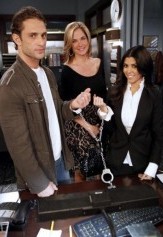 Oh my! Check out this video clip from Sunday’s all-new episode of Kourtney and Kim Take New York (10 p.m. ET on E!), where the young Kardashian prepares to appear on ABC’s One Life to Live for the upcoming March 28th episode.

In the clip below, she practices her lines with sis Kim and beau Scott Disick before meeting the rest of the cast. “I literally thought I would have two lines and my script is so long,” Kourtney, 31, admits to Us Magazine. “I have to kiss a guy, but I’m not an actress. I just don’t feel like kissing some random guy. This is definitely a lot more than I thought I was agreeing to.”

Later, the first-time actress comes face-to-face with her kissing partner, David Fumero, who plays Cristian Vega. As the pair rehearse, Kourtney — as lawyer Kassandra Kavanaugh — gets flustered. “I don’t know any of my lines!” she cries.  Despite her jitters, once the cameras rolled, Kourtney’s costars say she was a natural actress. After the jump, watch as One Life’s, EP Frank Valentini tries to run the scene with Kourtney in rehearsal.  So what do you think? Will Kourtney’s soap debut be a success?  You will have to tune-in Monday to One Life to Live to find out!

Are you kidding me? First of all, how nasal can you be. I don’t know why they hired her except for some kind of ratings. The Kardashians are the joke of all time! Television hasn’t any taste any more, it’s all about the money and ratings. What happened to integrity and taste and quality? These Kardashians must have gone to the school of non -acting and getting away with it. How dumb are we to fall for this? This is only to a nobody celebrity. Next we will have Paris Hilton playing a judge…..

How dare her think she is too good to kiss Christian, like he was not up to her standard. What a snot. The PTB on that show should of canned her from that and supported Christian and not give her one minute of air time. She is a nothing, her mom is the brains of that family creating a “job” for them and exploiting them. She comes across as a total nasty ditz and she isn’t up to Christians standards and should be able to polish his shoes.

why are they having her on? 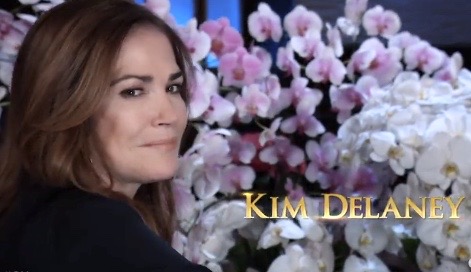 This week’s episodes of General Hospital have mostly been pre-empted due to major league baseball – but late news on Thursday morning has that a new episode will actually air today following the postponement of the Miami Marlins and Chicago Cubs game.

So look for an all-new GH that was originally set to air tomorrow to air today.  As to Friday’s GH, if the Marlins and Cubs game is rescheduled for that time, then ABC will air the game instead of the daytime drama series.

Now on to next week’s exciting promo heralding the arrival of daytime favorite Kim Delaney, in her new role rumored to be that of Demi Moore’s former role of Jackie Templeton.

In the promo for the week of October 5th through the 9th, Sonny (Maurice Benard) asks Carly (Laura Wright) what the big secret is as the voice-over says , “Everything is about to change.”  Meanwhile, Valentin (James Patrick Stuart) suggests it’s time to start praying.  So, just what is going on here?  Then, the ending of the spot features Delaney leaving us with more exciting questions then answers.

Soap fans loved Kim as All My Children’s Jenny Gardner early in her career (1981-1984) and have continually followed her path into primetime roles on N.Y.P.D. Blues, Army Wives, Chicago Fire, and CSI: Miami, to name but a few.

Watch the GH promo below, then let us know what you think about what will go down when Kim Delaney shows up on-screen? Comment below.