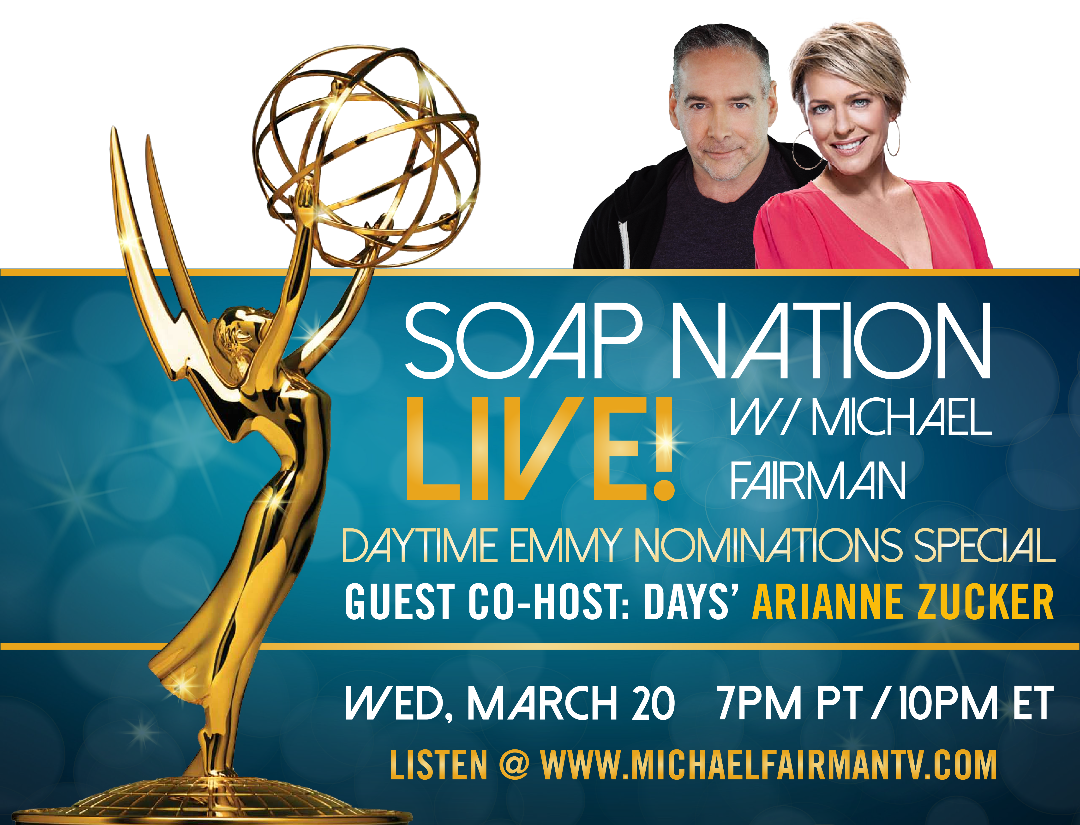 Make sure to come to this site a few minutes before showtime and settle in for this 90-minute plus special when we chat it up with several of the just announced daytime drama performer nominees who are going for gold at the 46th Annual Daytime Emmy Awards on Sunday night, May 5th.

Joining Michael in-studio as special guest co-host will be Days of our Lives, Arianne Zucker (Nicole).

In addition, we will be giving away 2 pairs of VIP tickets to the winners of our “Game Show Trivia” segment during the broadcast to Coastal Entertainment ‘s “Teals Got Talent” GH Fantasy Event in Philadelphia on May 4th featuring: GH’s Michael Easton, Lynn Herring, John J. York, Kathleen Gati, and former GH favorite, Rebecca Budig all to benefit the Sandy Rollman Ovarian Cancer Foundation.

The Foundation works every day to fund cures and foster community, and does so by supporting women fighting ovarian cancer and the friends and family who love them by standing together with every single person touched by ovarian cancer.  To date, they’ve invested more than $4.1 million in research through grants to scientists throughout the country. Soap Nation Live! is proud to support this worthy cause.

If you want to call-in to speak to the hosts, or nominated guests during our Daytime Emmy nomination special, please dial the exclusive listener line at 818-295-2130.

Throughout the broadcast, also visit the Michael Fairman TV official Facebook page for fun video updates direct from the studio, and keep abreast of what’s happening and who is chatting with us live via @michaelfairman twitter account throughout the show.

You can also live to the broadcast streamed live on the official Soap Nation Live! page at Spreaker.com

To find out who’s in the running. make sure to tune in to CBS’s The Talk beginning on Wednesday afternoon (11amEST/2PMPST) when the nominees are unveiled for the first time.  Then, hear the reactions of several of your favorite soap stars that night on Soap Nation Live!

If you have any questions you would like to pose to our hosts, or any nominated guests, let us know in the comment section below and we just might ask it on the air!  More show details will be forthcoming.

Kassie DePaiva Talks Eve’s Machinations & Eric Martsolf and Victoria Konefal Take You Behind The Scenes On ‘Inside Salem: Days of our Lives Podcast’

I wonder why Laura Wright isn’t doing this. She’s been doing the show for years with Michael.