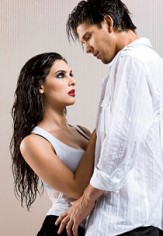 Look for lots of drama ahead when this week when two of Days of our Lives, hottest young stars, Casey Deidrick (Chad) and Camila Banus (Gabi) are picked to be the new faces of Countess Wilhelmina Cosmetics and their steamy ad campaign will make them an international phenomenon!

However, this sparks  Gabi to want more of Chad!  How much more? Well in a new interview with TV Guide, both Camila and Casey preview the next beats in the storyline which has a twisty triangle in store between Gabi/Chad/Melanie!  Here are a few excerpts!

Camila on if Gabi is on the rebound from the disaster of a relationship with Will Horton: “She’s totally on the rebound! There was nothing going on with Will — not even a little bit of kissing — so when Casey saved Gabi in the kidnapping, which is what she thinks happened, she looks at him as her hero. She sees how cute he is, and she thinks there’s something there. Plus, now they’re doing all these sexy modeling shoots wearing God knows what. [Laughs] Or, rather, not wearing God knows what. She wants him.” Casey:  “Which makes sense. [Laughs] Chad’s the only straight young male in Salem these days! What other choice does she have? My character has three girls after him right now. Oh, actually four.  I’ve been shooting scenes with Lisa Rinna [Billie] and she wants Chad, too! She’s totally after him! And he’s weighing his options. [Laughs] But, hey, for my character this is just another day at the office.”

Casey on how the Gabi/Chad/Melanie triangle will come to pass and then explode come this spring!
“A lot of soaps do the triangle thing, but this is being really well written and we’re having a blast. I can’t wait for everyone to see it. [Laughs] There will be blood! Gabi will get very manipulative. To be honest, I think she’ll go a little psycho. I don’t want to be mean. Just being honest.” Camila: “Hey, going a little psycho never hurt anybody.”

So will this be a case of fatal attraction? If so, Melanie better watch out, given that we have seen Banus play man-crazy when she went off the rails as One Life to Live’s Lola Montez!

One Life to Live's replacement; "The Revolution" has a very sluggish start!

Oh please…Billie is old enough to be Chad’s Grandma. This is just another rip-off of Ejami when they modeled for Kate back in the day as far as the modeling goes. If I wanted to watch re-runs of Days, I would watch the older Days of the past.

It is a shame that Chad is the only straight young male in Salem these days, because it’s very clear that the only two gay young males in Salem want him!!

EWW!!! BILLIE AND CHAD???!!! GROSS!!! Chabi aren’t much better either! Chelanie I can deal with a bit, but we all know that Chabigail and Mate are endgame!