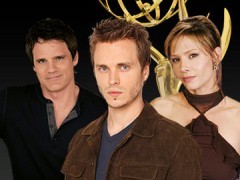 During the taping of the new On-Air On-Soaps Daytime Emmy Nomination Podcast many hilarious and revealing moments came to light.

See if you can figure out which guest or host said what, by matching the following names with the questions below:  Galen Gering, Carolyn Hennesy, Michael Park, Ricky Paull Goldin, Doug Davidson, Sarah Brown, Jonathan Jackson,  or  Bradford Anderson.

Which star had an emergency appendectomy two days before taping the show?

Which star has a colonoscopy on her Daytime Emmy nomination day?

Which star said, they would become a landscaper, and work in the nude for Carolyn Hennesy?

Which star asked to ask Ricky Paull Goldin, why are there two “L’s” in Paull?

Which star decided against submitting his most memorable scene for Emmy competition?

Which star is considering wearing black and red on the red carpet in honor of her character?

Which star let one of their producers pick their Daytime Emmy reel that got them a nomination?

What star claims “they were not out golfing” when we tried unsuccessfully reach them by phone during the podcast?

Who had the 411 on why Maurice Benard did not land an Outstanding Lead Actor nomination?

Make sure to listen to the podcast for the answers!

Larry Bryggman back to ATWT for one episode!