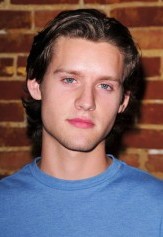 Y&R’s Nick and Sharon have a son, Noah Newman.  Remember?  Well, Kevin Schmidt was the last young man to inhibit the role, and now comes word from Soap Opera Digest that Luke Kleintank, seen recently on Gossip Girl as Elliot, has landed the plum role.  From this first look image, he looks to us like a younger Joshua Morrow-type.  Certainly different vibe and look than the blonder Schmidt.

Look for Kleintank to debut on September 21st, which means another addition to Genoa City’s  mix younger set, and perhaps getting his biological parent’s heads on straight!

GH Video Promo: "The Return of Brenda" Watch it!

Is Billy Warlock headed back to DAYS?