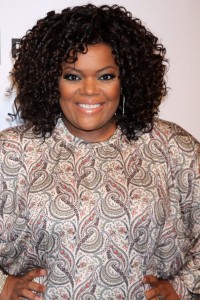 Even when you are an actress who has appeared in countless primetime television series, when you get the call that you are headed to Genoa City, it’s big news!

Soap opera super fan, actress Yvette Nicole Brown is getting an opportunity to mix it up with some of the biggest characters on The Young and the Restless when she shoots her guest appearance this week on the number one daytime drama series.

The Community and Odd Couple star revealed to TV Line, who broke the news of her upcoming appearance, “The people at CBS found out that I’m a freakin’ fangirl. And they were like, ‘Do you want to go to Genoa City?’ And I’m like, ‘Um, yeah.’ It was probably one of the most exciting calls I have ever received. The only thing that could equal it is if I were to get a call to be on Sesame Street.”

On Y&R, Brown will play a reporter in scenes with Peter Bergman (Jack), Gina Tognoni (Phyllis), and Jason Thompson (Billy).  She shared: “All I know is something is happening with Jack, Billy, and Phyllis that’s a big deal, and I’m reporting on it.”

Brown’s episode of Y&R will air on Monday, April 4th.   That is three days before The Odd Couple begins its second season on CBS.  The sitcom returns Thursday, April 7 at 8:30PMEST/7:3oPMCT, replacing Life in Pieces.

So, what do you think of Yvette Nicole Brown getting the chance to share scenes with Gina Tognoni, Jason Thompson, and Peter Bergman on an upcoming episode of Y&R? Comment below!

Wally Kurth Returning To GH As Ned, While Also Staying Recurring at DAYS!

Never heard of her, so I probably won’t even notice.

Thats great now what about US “Super Fans” who are NOT famous but would like a shot at making a guest appearance?

If the soaps sunk half as much time into finding talented writers as they do stunt casting the genre would be in much better shape. I have never liked stunt casting since the days of Carol Burnett as ALL MY CHILDREN’s Verla Grubbs — it takes me right out of the story because I know these celebrities aren’t sticking around for long so their scenes won’t have much gravity or impact.

couldn’t agree with you more

No different than a soap star making a guest appearance on a primetime series…we congratulate them so i have no problem when someone outside the soaps make a soapy guest shot…jmho.

For my money the best celebrity soap stints have been those featuring mature actors who brought their talent to roles that were long-term and whose characters had an impact on long term story. Standouts for me were Barbara Rush as Nola Orsini on ALL MY CHILDREN, Ava Gardner as Ruth Galveston on KNOTS LANDING, Farley Grainger as Earl Mitchell on AS THE WORLD TURNS, and Kim Hunter as Nola Madison on EDGE OF NIGHT.

Wow, such negative reactions on this comments thread.

I look at it like this: Personality-wise, give me Yvette Nicole Brown over that Sheryl Underwood any day.

zzzzzzzzzzzzzz……….BUT…..not to the article…….zzzzzzzzzzzzzzzzzzzzz to the CONSTANT….REPETTIOUS…UNRELENTING…….negativity of the posts/comments…..iwhatever happened to “if you have nothing good to say..say nothing”?….Ms. Brown is a real person……would you like a person posting they “do not care” about you.?

Oh sorry I must have forgot that Ms Brown was playing herself.

This stunt casting stuff is ridiculous and completely worthless (other than the blatently obvious goal of CBS’ cross promoting the night-time comedy on which this woman appears). It adds NOTHING to Y&R — which, frankly, needs a LOT of help, especially in the writing department.

Of all the things that Y&R needs, I definitely would NOT include this type of stuff on the list.

That’s the first thing that popped into my head, too…WHYguest appearance? No of fence to Ms. Brown, but, I consider someone famous to make guest appearances. She looks familiar, but, I have never heard of her. Weird, very weird. What’s up, Y&R?