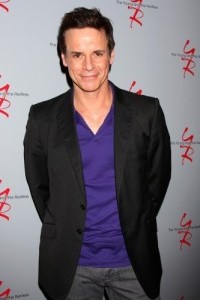 Three-time Daytime Emmy winner, Christian LeBlanc (Michael Baldwin) of The Young and the Restless is always one busy bee, but now the talented guy has added “film and television producer” to his laundry list of credits after getting involved in a project very close to his heart.

LeBlanc, who always has done children’s illustration and art, and was a former Kindergarten teacher at one point in his life,  got the opportunity to become a producer on a project for Nickelodeon called Deadtime Stories which is based off a series of books written and published years ago that plays to children seven-years- old and up and their families!

But there’s more!  This TV project originated out of a  full-length feature film titled Grave Secrets which is playing this afternoon at 2PM in San Diego California, and the San Diego Film Festival.  LeBlanc tweeted today “Join me at the @sdfilmfestival at the screening of “GRAVE SECRETS” in Lajolla at the ArcLight Today, Sunday at 2pm with @Diane_Ladd @comeagainjen @AshleyAJones and the ghosts…let’s not forget the ghosts!!! @deadtimestories”  So, if you are in the San Diego area today, go check it out and meet Christian and Ashley!

When On-Air On-Soaps spoke to Christian on the movie and the television series, he related how it all came together:  “I got Ashley Jones (Bridget, B&B) on board to act, and Diane Ladd stars in it.  So they put together and shot the movie called, Grave Secrets which is now one of the stories in the Deadtime Stories TV series.  The movie Grave Secrets in which I am in, I was  cut out of for the television episode version of it (laughs) that will air on Deadtime Stories on Halloween night on Nickelodeon! I decided to play a very small part in the movie, as it gave me the chance to work with Ashley Jones.  We play a married couple, the parents.  The stars are the kids and Diane Ladd and Jennifer Stone is the through0line in the series and the film, and she is a babysitter that reads these books.”

For those who don’t know Jennifer Stone, she was on the hit Disney series,  Wizards of Waverly Place, and according to LeBlanc,  “She brings the Disney audience with her which is wonderful for the project”

Deadtime Stories premiered this past Thursday night, October 3rd at 8pm on Nickelodeon.  The series will run every Thursday night in October from 8pm to 9pm with two new episodes back to back, culminating with Grave Secrets on Halloween – the last Thursday of the month, and that is the episode LeBlanc was the producer on!  For more on the series visit its website here!

So will you be checking out Grave Secrets on Halloween night on Nickelodeon with your kids while handing out candy to those who knock at your door?  Let us know!

THIS WEEK On DAYS: Marge Is Gunning for EJami with Dire Consequences!