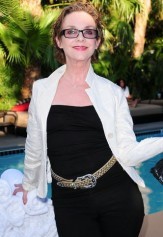 The Young and the Restless, Judith Chapman, who chews the scenery as Gloria Fisher Bardwell make the most of everything she is given to perform on the set of the number one CBS sudser.   However, over the last year after being front and center for years prior, many have seen her character languish on the backburner.  But for Chapman, she says things are on the upswing in a new interview out in Nelson Branco’s Soapgeist column on TV Guide Canada’s website.  The actress also reveals she is also working on a new stage play all about the famed Hollywood actress Vivien Leigh, you know the one from Gone with the Wind!    Here are a few excerpts!

Chapman on Gloria’s lack of airtime: “For a while, I was carrying the show, but you know the cycle of soap opera. It’s like a roller-coaster — sometimes you’re up, and then you go down and someone else’s roller-coaster peaks. With GloWorm, I think it’s time to see more of her because it harkens back to Gloria’s main motivation, which is to show all the higher-ups in this town that she really is something. I love that everyone is coming to her club; and thank you Maria for showing that gorgeous set all the time. I think Gloria wants even more respect because she still considers herself a part of the Abbott clan, even though they bash her. I hope she’s on the upswing. One of Gloria’s goals is to be on the cover of Restless Style with her sons. Everyone would hate that; especially Jill — and everyone else who hates Gloria!”

Chapman on her upcoming new one w0man show on Vivien Leigh:  “I was looking for another project to do with Christian LeBlanc and Michelle Stafford but it was hard to get everyone coordinated so I said, “Darn it; I’m doing another one-woman show.” And this thing, Vivien, written by Rick Foster, absolutely presented itself. When I read it, I just got the shivers and said, “this one is mine.” It’s the same way I felt when I auditioned for Gloria. It was intended to be just two fundraising performances for my theatre company Rogue Machine Theatre here in L.A. — which is considered to be one of the Top 10 L.A. theatres and we’re only in Season 4 — but now they’ve offered me a limited run for six performances in May. It a bare stage with Vivien coming on and going through her triumphs and madness. It’s only one act, an hour and 20 minutes. I don’t mean to sound arrogant but I think I’m going to be quite brilliant in it.”

Jay Johnson and Shelley Hennig leaving Days of our Lives!

Regis Philben makes annoucement that he is retiring!

Love Judith Chapman! Love her character Gloria on Y&R. Great Actress and Beautiful Woman with a great beaming Soul that touches everyone. Also, thank you for sharing this fine photo of her from John Paschal (JPI Studios) one of my fav. photog’s as well. Best, Ken Rambo –

Judith Chapman is a very diverse and talented actress. I have followed her in daytime for many years and have watched her in a lot of primetime episodic work. I hope Gloria returns to the front burner soon on Y & R.