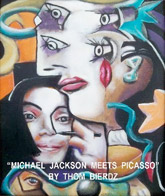 “Y&R’s” Thom Bierdz (Phillip/Langley) whose artwork is natonally and internationally known, sent this statement out today following the deaths of both Michael Jackson and Farrah Fawcett, both whom he had met, and both who he incorporated into his art pieces.

Bierdz made this statement; “These portraits are looking at me from across from my gallery desk, and have been for years, as they are two of my most cherished pieces. I am saddened by the passing of Michael and Farrah and was fortunate enough to have met them both. I was a huge fan of both of theirs since I was a teenager! His creative genius I likened to Picasso’s and personally I so admired the way he reinvented himself (I identified with his lack of self-esteem and had silicone in my jaw to widen it, and I assume Michael did that as well) and Farrah was so radiant when younger, and when I spent an evening with her, I was surprised how sweet and fragile she seemed, and I identified with her social phobia on the particular night we met, through mutual friends who knew we were both artists. Farrah was a wonderful sculptor.”    To view more of Thom Bierdz paintings check out his gallery on his website! 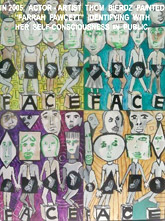