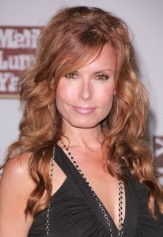 Who doesn’t have a double? A false face? Or, some other bizarre facial reconstruction on the number one soap, The Young and the Restless? Well, add Lauren Fenmore, played by the veteran Tracey E. Bregman to that list.  As it was revealed late last week, that Lauren has a double now, the evil Sarah Smythe, the evil sister of Sheila Carter, and Lauren’s long time nemesis. Bregman weighed in with TV Guide Magazine on the plot twist!

Bregman on being abducted year in and year out: “[Laughs] Listen, a year without being bound, gagged and duct-taped is just not a good year for me! You know how you do your yearly doctor’s exam and they tape you up for the EKG? They always ask, “Are you allergic to tape?” I tell ’em, “Only duct tape. It makes my face break out.” And they’re, like, “Whaaat?” I say, ‘Never mind, darling. It’s a long story.”

Bregman on Sarah’s evil plot.  Is it to trade places with the lovely Lauren?  “I think it’d be too easy to kill Lauren. Sarah really wants Lauren to suffer because Sarah has suffered so much. In Sarah’s mind, Sheila was murdered in cold blood by Lauren. Also, Sarah had to raise Sheila’s children because Sheila was always so obsessed with Lauren that she wasn’t around to raise her kids properly. You can just imagine what it would be like to be in a family with Sheila! Sarah never had any sense of personal power, she never had a real chance in life. So now, in setting up this revenge, she’s finally as powerful as Sheila was. Sarah’s initial goal is to make Lauren suffer by taking her place in her world, and letting her know it. But pretty soon that doesn’t become enough for her.”

Gotham episode #11 is here with Byrne, Park and Crane!

Do not tell me Y&R is going to do another plastic surgery story. I’ve waited to see who the villainess is and what a let down It’s just a repeat of the Emily/Patty story. C’mon! don’t tell me the writers can’t be more creative? And we certainly know Adam isn’t dead, because there really wasn’t closure on that story. It looks too easy and I’m not that naive….

If Maria Arena Bell does not get TVG”s Michael Logan’s not so subtle dig at her writing by comparing Y&R to Passions, then she’s completely in her own orbit. At least Passions had its insane brand of humor reveling in the ridiculous. MAB actually thinks this is a good idea. My goodness she’s ripping herself off! And could they actually rectify the Sheila situation instead of this Sheila sister rewrite. This is like the new trend in Daytime: the sudden sibling syndrome. B&B never mentioned a Bill Spencer Junior, and there he is. Same w/ this Sarah Smythe crap! No… Read more »

yes doe are the sreious!?!?!?! i was hopeing in some small way that they would bring back the old sheila as her [twin] sister……that would be more beleivalbe! and then go from there! I feel the same about adam although i did love the “back hand” from Victor!
🙂