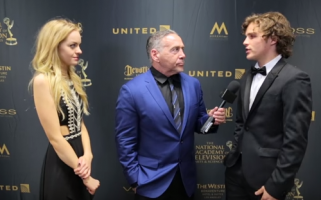 Two of the younger set of Days of our Lives, James Lastovic (Joey) and Olivia Rose Keegan (Claire) were presenters at the recent 43rd Annual Daytime Creative Arts Emmys ceremonies.

After taking the podium to announce several winners in several categories, James and Olivia stopped by to talk with NATAS official host/interview for the evening, Michael Fairman, where they discussed getting through all the names of the nominees in the categories, but then talked about their characters latest drama on DAYS.

For Lastovic’s Joey, who has gone on the run, after murdering Ava Vitali, Lastovic shares:  “He (Joey) is a good guy, and he has done a really bad thing.  He is young and he is trying to figure out whether he is good or bad.  That’s why I think his relationship with Steve (Stephen Nichols) is really vital to him at this point, because Steve went through the same sort of things when he was Joey’s age, and so he is able to guide him through it.  I think without Steve, Joey would be going down a much darker path.”   The young star also adds:  “Joey is a very unique character on his own, he is not a remake of Patch.”

As for Keegan, as DAYS fans know just last week news of her being put on contract with the NBC soap opera becoming official news.   She says she looks forward to more with Claire and that she will have more of an opportunity to sing on the series as well

Watch James and Olivia’s chat from the Emmys after the jump.  Then let us, what are your thoughts on these two newcomers? Are you enjoying the current story of Joey and Claire? What do you hope the new writing regime will do with their characters moving forward.

Considering Joey killed someone, I think he’s bad. Kayla should have put him in therapy, although, that’s a bit tricky as he couldn’t really confess what he did. Maybe he’s gone to confession.

Am I enjoying Claire and Joey’s current storyline? Not really. And I would like Joey and Jade to stay missing and no one goes after them to get them.

I wish Days would play more that Claire is Ciara’s niece and Hope’s granddaughter. Some of Claire’s storyline is okay, but I do not like the teens overall. Especially Ciara as the actress is not good.

I think Olivia Rose Keegan is growing into her role as Claire very nicely. She always seems fully present during her scenes and actually interacts with the other actors which is more than I can say about the other teens. I wish she has equally as talented peers to interact with.