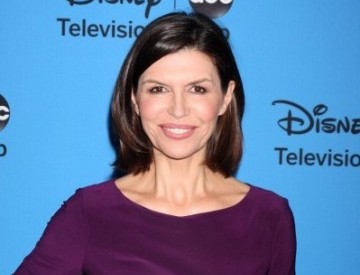 On Sunday, the stars of ABC participated in the All-Star Cocktail Reception immediately following the conclusion of a busy and long day as members of the TCA (Television Critics Association) attended panels on all the new shows for the fall season that the network is rolling out and has high hopes for!

But while many new shows were unveiled,  several of your favorites from daytime’s General Hospital including Finola Hughes, Brandon Barash, Kirsten Storms and Jason Thompson, and nighttime soap favorites from Revenge, including Emily Van Camp, Barry Sloane, Nick Wechsler, Josh Bowman, Madeleine Stowe, Gabriel Mann and Christa B. Allen were out in full force in support of their series!

In addition, Nashville’s Sam Palladio and Scandal’s Kerry Washington all posed on the red carpet arrivals line before entering the cocktail reception to meet the press and hang out with their peers and network executives.

Take a look at our photo gallery of the ABC stars after the jump with our captions, and let us know, who was your favorite from the photo gallery? And tell us what show are you looking forward to most in the fall season on ABC? Revenge, Nashville or Scandal?  And, we assume you will continue to support and watch General Hospital throughout the fall too!

Y&R's Christel Khalil Sues Agent for Sending Her Out On Audition … For Y&R!

Amber Tamblyn Cast In Two And A Half Men As Long Lost Lesbian Daughter Of Charlie's!

Kirsten, Brandon and Jason… and Finola… of course! Love GH!!! Can’t wait for your video interviews!!! Love Revenge too… Nolan is my fave!!!

Most of the ladies & gents looked lovely, but why can’t some of the younger actors from GH dress a little nicer when they go out for these press junkets? Kirsten S. is adorable, but why couldn’t she have worn a dress? Jason T. looked sloppy in his jeans. At least Brandon B. wore a jacket with his sloppy jeans.
I’m sure it’s just me, but I appreciate it when the stars take a little time to look their best when they make appearances.
Go Finola! She looked gorgeous!

I will continue to watch GH! And support GH all threw the fall,winter, and so on !

Scandal is the best night soap opera right now. The storylines are fast and soapy. Scandal has some of the best directing bec it enhances how storylines unfold and the directing is polished. Scandal’s flaws though are casting for huck and atty general and fitz. They should recast huck and atty general bec they’re horrid actors who deliver their lines w/ such bad acting. While fitz is not attractive at all. Only good thing from that is it makes kerry even look more pretty when she’s w/ him. Giggles. Scandal’s should have cast fitz w/ a handsome actor bec it’s… Read more »